Here’s everything that happened at UFC Vegas 5 last night

After a month-long stay at “Fight Island,” UFC returned to Las Vegas, Nevada and the UFC APEX last night (Sat., Aug. 1, 2020) for UFC Vegas 5. Last night’s card was never going to be the best of the year, but it was particularly ravaged by injuries, weigh-in debacles, and late replacements. Fortunately, the nine bouts that did take place still managed to provide some entertainment!

Let’s take a closer look at the slickest techniques and best performances of the night:

Derek Brunson vs. Edmen Shahbazyan began as a close fight.

Early on, Brunson and Shahbazyan traded power shots and big moments. First, it was Brunson backing his foe into the fence, landing some lefts, and scoring a takedown. It didn’t take long for “Golden Boy” to rally back, ripping the mid-section with heavy kicks and fast punches.

The fight was exceptionally competitive until it nearly ended. When Brunson scored a sneaky trip takedown around the final minute of the second round, it was his first real control position of the fight. He made the most of it, dropping exceptionally heavy shots for most of those 60ish seconds. Just before the bell, Brunson landed an elbow that briefly sent Shahbazyan to another stratosphere.

It’s a valuable — if quite painful — lesson for the young knockout artist. Mistakes and rest are seldom afforded inside the Octagon, as a single takedown from Brunson changed everything.

Joanne Calderwood was next-in-line for the Flyweight title shot, but she opted to risk that position by taking a short-notice fight against the very tough Jennifer Maia. It backfired almost immediately, as Maia walked through Calderwood’s kicks and punched her in the face with an unfortunate consistency.

Calderwood adjusted smartly by catching a kick and scoring a takedown. Unfortunately, she fell into one the constant traps of women’s MMA: the armbar from guard. Maia has a jiu-jitsu black belt and flexible hips, which is the perfect recipe for rolling up on an armbar and securing the tap … not unlike the technique Maryna Moroz used to tap Calderwood back in 2015.

Luque is hands-down one of the most exciting fighters on the planet.

He’s in the elite tier of action fighters, one that simply does not compete in boring fights. In terms of pure excitement, he’s in the company of men like Justin Gaethje and Thiago Santos, and he deserves such recognition.

Beyond the simple fact that Luque fights are must-watch, “The Silent Assassin” deserves recognition for his success. Luque doesn’t get the luxury of fighting established contenders all that often. Instead, he fights low reward-high risk opponents like Randy Brown, Niko Price, and Belal Muhammad — and he keeps beating them up!

Sure, “Wonderboy” picked him apart in his only shot at a top five foe, but Stephen Thompson is one of the best kickboxers in the UFC! Even with that loss, Luque has earned a larger fan base and greater opportunities.

Don’t look now, but Bobby Green might be better than ever.

In his rematch with Lando Vannata, there was no controversy. Green took some big shots across 15 minutes, sure, but that’s really the reality of fighting such an offensively skilled athlete. More to the point, Green was remarkably on point: his straight shots snapped Vannata’s head back with regularity, his counters landed, and his head movement was gorgeous to watch.

Oh, and that Muay Thai clinch! Green abused his foe in the clinch in the first fight, and that repeated here, as Green slammed home a heavy pair of knees then dropped Vannata with a big elbow.

In a way, Bobby Green reminds me of Jorge Masvidal. The Strikeforce veteran has been really skilled for a really long time, but his own hesitance/inconsistency/over-confidence occasionally costed him close decisions. And while it’s unlikely that Green will see a similar rise to prominence as “Gamebred,” consistent wins and paychecks at a high-level for an underappreciated veteran is always great to see.

It’s a real shame Jonathon Martinez missed weight by a terrible five pounds. If not for that black mark, Martinez utter destruction of Frankie Saenz would surely stand as the best win of his career.

From the Southpaw stance, Martinez made fantastic use of his left leg. He dug his toes into the belly with snap kicks. He threw powerful round kicks to the inner thigh and liver with horrifying regularity. Whenever Saenz tried to push forward with a big combination or takedown, Martinez fired a counter knee up the middle.

All of those are painful shots, and they landed seemingly every time Martinez fired. By the second round, Martinez was landing the left high kick nearly at will as well, as Saenz was getting hurt to the mid-section often. Martinez dropped his foe at least twice in the second, nearly finishing in the final seconds of the round.

There was no reason for Saenz’s corner to send him out for the third round. Naturally, they did anyway, and Saenz promptly ran into a brutal knee to the jaw that ended the contest.

Martinez has come such a long way since his UFC debut. His kickboxing was always technical, but now there’s real impact behind his shots. Plus, his takedown defense has improved, allowing him to throw a lot more strikes.

It’s just a shame about his weight cut. 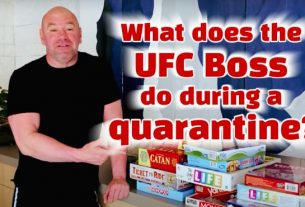 Video: What 5 things has Dana White been doing to ride out the coronavirus quarantine?