Photos: Nick And Nate Diaz Train It Up For 2021 Returns

Will 2021 be the year we witness both Nick and Nate Diaz competing in the UFC?

It’s certainly a possibility, albeit with a few major money-related roadblocks in the way. Reports have the UFC in negotiations with Nate Diaz for a BMF rematch bout with Jorge Masvidal for January 2021. As for the elder Diaz, his manager recently reported that Nick just completed a 14 week training camp and test weight cut in preparation for his own 2021 return.

Now we’ve got even more pictures of Nick training, and this time he’s got his brother Nate alongside him. Take a look at the photos shared through ESPN from photographer Scott Hirano:

There’s no doubt that Nick is serious about getting himself another fight. But the big question right now is if he can come to terms with the UFC on a return. Which is a bit crazy when you think about it. Nick sells pay-per-views. His fights against Georges St-Pierre and Anderson Silva were some of the biggest fights of their respective years. His little brother Nate has been in three of the top selling pay-per-views in the history of the company, with more undoubtedly possible if the UFC would actually treat him like the star he is.

But when asked about Nick’s desire to return in 2021, UFC president Dana White didn’t sound particularly enthusiastic about it at all.

“I think the only big sticking point with him is money, because he knows he’s a big star and wants to get paid,” Shields said in a SiriusXM podcast. “He doesn’t want to get ripped off. We all know people are going to tune in for a Nick Diaz pay-per-view. Dana can act like that’s not true but everyone knows people want to watch him fight.”

What do you think, Maniacs? Will we really see Nick Diaz make a comeback, or is this just a pipe dream? 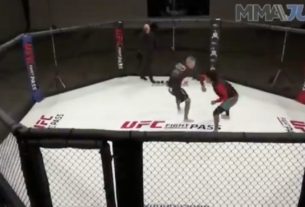 Grapplers At SUG12 Kick Off Event With Social-Distancing Elbow Bump