After weeks of claiming USADA hasn’t been visiting him in Brazil leading up to his UFC 253 title fight, Paulo Costa finally got a drug test.

Paulo Costa is deep into his UFC 253 camp as he prepares to fight his nemesis Israel Adesanya for the middleweight title, and to say he’s looking pretty jacked is an understatement. Costa is a massive ball of muscle these days … a suspiciously massive ball of muscle in some people’s opinions. Adesanya himself has made it no secret that he thinks Costa is on PEDs, and has said “I’m going to pop Costa before USADA does.”

Of course, he’ll have to wait until September 26th for his chance. USADA? They show up whenever they want, which is exactly what happened this week according to Paulo Costa’s latest video blog. Titled ‘FINALLY USADA CAME TO TEST ME!’, the vid shows Costa fresh off a sparring session as a U.S. Anti-Doping Agency agent enters his gym looking for a sample. Is that a little bit of concern in the eyes of “Borrachinha” I see?

“Is USADA coming to Brazil?” he jokes. “It’s the first time USADA comes. I didn’t even know USADA existed in Brazil. The last test was done in Arizona.”

According to the USADA UFC page, Costa has actually been tested 7 times over the course of 2020 (5 times in the third quarter alone), so he may just be trying to troll Adesanya and / or the fans.

It’s an interesting glimpse into the whole process, with cameras showing Costa boxing and taping a urine sample, then having blood drawn from his massive bicep.

This fight against Israel Adesanya at UFC 253 is Costa’s first fight since a decision victory over Yoel Romero back in August of 2019. That earned him a title shot, but an injured bicep put him on the sidelines for a year. He’s looking hungrier than ever in these latest videos, which give us faith in UFC president Dana White’s declaration that Adesanya vs. Costa will be the best fight of 2020, hands down.

If “Borrachinha” passes this drug test, of course. 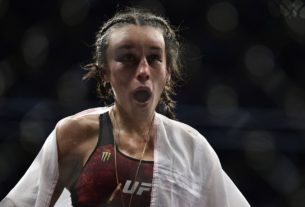 Covington Trashes ‘Washed Up’ Jedrzejczyk For Getting Her Face ‘Rearranged’

Marlon Moraes vs. Merab Dvalishvili Reported For UFC 266 In September