Muhammad Ali is widely considered one of the greatest boxers of all time. An Olympic gold medalist who ended his professional career with a 56-5 professional record as a multiple-time champion. Perhaps it shouldn’t be a surprise that Khabib Nurmagomedov — arguably the most dominant fighter on the planet right now — occasionally draws comparisons to “The Greatest.”

Though he appreciates the thought, Nurmagomedov is reluctant to consider such comparisons, as he believes the circumstances are far too different to compare.

Khabib on the comparison with Muhammad Ali pic.twitter.com/Msskgm9sbq

“I think comparing Ali and me is probably wrong,” Khabib told True Gym MMA in a recent interview, per The Sports Rush (transcription via BloodyElbow). “Only if we talk about the fact that we are both champions and both Muslims. But all the things he did outside the ring, with this I cannot be compared indeed. At the time when he was a champion, he was…another race, and at that time in America, black people were treated badly, and according to his stories, he was not even served in restaurants.

“He threw away the gold medal. He changed the attitude towards his race very much. So, we cannot be compared. To be able to compare me with him, I need to go back to those years and be black, and be a champion. After that we would see how I would have behaved in such a situation, In this case, we can be compared.

“I like that people compare us, but I think it is inappropriate.”

Nurmagomedov is currently scheduled to defend his title opposite interim champion Justin Gaethje on Sat., October 24, 2020 at UFC 254.

I accepted a short-notice fight for the Global Legion FC Flyweight title on September 26th in Tampa, Florida! For each of my previous professional fights, I’ve raised funds to cover camp costs via my banner, in which members of the Mania community can get their name/nickname/username on the banner via a $5 or more donation. The promotion has rules against advertising during their shows, so the banner is unlikely to make it into the actual cage, but it will still be signed and raffled to a random supporter.

For anyone reading who enjoys my writing and would like to support/enter the raffle, I have Venmo (AndyLRichardson), PayPal ([email protected]), and a GoFundMe. There will be a PPV stream link that I’ll include here as well once I have it … Let’s bring home a belt, y’all!

14 days notice, five-round main event title fight. Everyone wants to be a fighter until it’s time to do fighter shit!

Genuinely folks, I am conflicted. On one hand, I would absolutely love to see Michael Chandler step up and fight Tony Ferguson, which would be such an incredible fight.

#workoutoftheday – Bucket toss, fast hands. – FINISHER FOR TIME —30 sec. each side— —1 min rest— —6 sets— – This is a great way to get the upper body wasted after a good workout. It’s only 6 minutes of work but a fast way to blow out the arms. – Keep working! – See you at the top! – : @dustinhayungs

At the same time, Dustin Poirier deserves to be paid, and the accusation that he is afraid of Ferguson … well … it’s absurd.

“Listen, there’s a lot of different ways to turn down a fight. Negotiating yourself out of one is one of the ways you can do it. So for whatever reason, he didn’t want to take this fight. Only he knows that.” – @danawhite

Best caption wins a surprise give away. Winner will be announced in 24 hours!! #thegeneral

One Championship adds insult to injury.

Will Johnny Walker return to his winning ways this weekend opposite Ryan Spann? He better, because the original hype train is fully burned.

Is Johnny Walker going to get back in the win column against Ryan Spann on Saturday? – @johnnywalker @coach_kavanagh @sbgireland – #ufc #mma #ufcvegas11 #fightstats

I do not usually link entire fights in this section, but since Paulo Costa vs. Yoel Romero was such an amazingly absurd spectacle, I feel like it’s a special occasion.

#OnThisDay in 1981, @SugarRayLeonard unified the welterweight title with an epic 14th round TKO of Thomas Hearns in Las Vegas #boxing #history pic.twitter.com/D21xejWtTk

Jordan Williams left no doubt with this knockout #DWCS pic.twitter.com/L4lq3SRw4F

Maa! your cat is doing that thing again pic.twitter.com/rhYVHLsYH4

Midnight Music: I listened to one of my Spotify Daily Mixes of mostly classics tonight. It’s been a little while (I hope) since I last posted a Beatles song, so here’s a favorite of mine that popped up (and yes, the Smokey Robinson original is quite good too).

Dustin Poirier bracing himself for ‘Hot Ones’ appearance this week 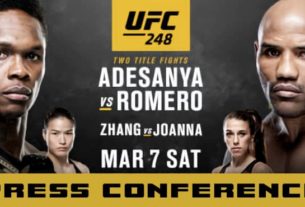