Former Ultimate Fighting Championship (UFC) welterweight title contender Stephen Thompson has not seen action since last November, and when mixed martial arts (MMA) is how you pay the bills, there is only a finite amount of time you can last between fights.

That’s why “Wonderboy” is breaking character to call someone out using his social media account, which according to the former kickboxer, is the first time in his combat sports career that he’s ever had to resort to that all-too frequent tactic.

“All due respect Leon Edwards, which I have a lot of for you, I have been saying I would like to fight you for a while now! It makes sense and would be a great match up,” Thompson wrote on social media. “I think that was my first Twitter call out ever. Man that felt weird. #FirstTimeForEverything.”

Unfortunately for Thompson, who I don’t expect to keep track of these things, he’s no stranger to Twitter callouts. “Wonderboy” tried to get something going with former welterweight champion Robbie Lawler back in 2018.

Edwards (18-3) has now captured eight straight wins and holds the No. 3 spot in the official welterweight rankings. Thompson (15-4-1), meanwhile, has not won back-to-back fights in over four years and slipped to No. 7 at 170 pounds. 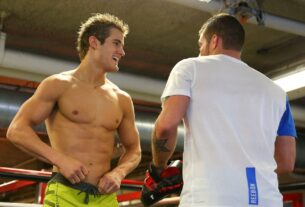