A bad weight cut, some bad communication, and an ambulance ride to the hospital just cost Bellator the main event for it’s first CBS Sports Network show. Here’s what happened.

Bellator’s first Thursday night event on CBS Sports Network took a big hit earlier today when it was announced that headliner Paul “Semtex” Daley was off the card after a botched weight cut. It was all a bit confusing … Daley hit the scales 2.6 pounds over the welterweight limit but his fight with Derek Anderson was still to go ahead … until Daley was wheeled out on a stretcher to an ambulance before the Bellator 247 face-offs.

Things got even stranger when Daley re-appeared a few hours later saying he was ready to fight. But by then the decision had been made and the fight would not go ahead.

So … what exactly went on? “Semtex” took to Instagram with a video to give a detailed play-by-play of the situation.

“I wanted to give you a few more details: I weighed in at 172.6 pounds, so I was 1.6 pounds over,” he said. “Sorry … I got that a little bit wrong there. Went down to the weigh-ins, felt okay. Still feeling the effects, knew I was going to come in over. I let the Bellator staff know I was going to come in over. All was well, fight was still on. Jumped on the official scales, confirmed I’m over. Fight’s still on.

“From there I’m trying to rehydrate, get as many fluids on board and lying down. But I keep getting called up to do stuff, which I know is part of the job but I just cut weight so … up doing interviews, doing COVID test which is necessary. Did my medicals, signed some posters.”

“I went back to lie down in the medical room, because they have those beds. Went in there, lied down, started to get some cramps. They’re not your ‘pull up on the football field’ cramps. Severe cramps in my hip, and abdominal cramps, which I’m used to, and has happened before previously when cutting weight. But normally, all of this is all taking place upstairs in my bedroom with my team, out of the way, while I’m getting rehydrated and getting my body where it needed to be.”

“Unfortunately, because of the restrictions, this had to take place downstairs in full view of other fighters, the Bellator staff, et cetera,” Daley continued. “So I understand why everyone was taken aback a bit by this. I wasn’t allowed to leave. So then I’m calling for assistance from the Bellator staff. I need to lower my body temperature, I need to keep getting fluids on board, and if someone could massage my legs, as stupid as it sounds, that would be a big help.”

“Took about 15, 20 minutes for people to take me seriously. Everyone kept giving me countdowns to get up to do the fake weigh-ins. ‘Oh you got 6 minutes, you got 5 minutes.’ I’m on the bed, not doing too good. I’m saying, ‘Look, I need some help.’ Shake my legs out, shake my arms out. Give credit to one or two of the Bellator staff that could see the situation and came and helped. This escalated and led to me saying, ‘You know what, get me an ambulance. Cancel the fight, get me an ambulance. I’ll just have an IV … the IV being the key, because I know if you have an IV, the fight’s off, anyway.”

#Bellator247 weigh-ins are in the books!

How to watch tomorrow morning’s card:

“So what happened: ambulance came, got wheeled off, got to the hospital … and was there for an hour and a half, and I slept. Obviously, my case wasn’t a priority because there were elderly people coming in for whatever reason there was quite a few other people there, hope it wasn’t a bad situation for them with the COVID and whatever. So I just slept in the waiting area, on the bed, for an hour and a half.”

“When I woke up, I was there with my cornerman. I felt great, I hadn’t seen a doctor, no one even knew I was there. Jumped off the bed, jumped in an Uber and came back to the hotel. Just ate, feel fresh, feel 100 percent. Then I realize that because I didn’t have the IV that there’s a possibility I can get this fight back on. So I start communication with my manager Ali and a few people in Bellator and it seems like there’s a possibility of the fight happening. As I said, no IV, fit to go, wanting to fight. And then I learn there’s not a chance.”

“Like I said, this is not unusual for professional fighters,” Daley concluded. “It just normally takes place in a room with my team. It’s just unfortunate it took place downstairs and that Bellator, CBS and Sky Sports, even though I’m fit, I’m healthy, I’m 100 percent, no hospital treatment, ready to go right now, don’t want to put the fight on. So I apologize.”

It’s certainly too bad that Bellator 247 has lost it’s big main event. The new main event is Kate Jackson vs. Denise Kielholtz, which certainly doesn’t have the same sizzle as “Semtex” in a big banger bout. On the plus side, a middleweight tilt between Norbert Novenyi Jr. and Laid Zerhouni is still on the card, and that should guarantee fireworks.

As always, keep it tuned to MMA Mania for all the updates and highlights from Bellator’s CBS Sports Network debut this Thursday. 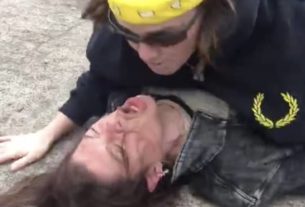 Mike Winkeljohn: ‘In My Heart, I Think Jon Jones Will Sit Out a While’