Jung landed crisp leg kicks early that forced Ortega to switch up stances. Ortega returned the favor with a few timely counter punches before Jung found his own power shots. In Round 2, Jung opened up more with punches and started to force Ortega on the back of his feet. Jung followed his efforts up with a massive uppercut along the cage. Ortega came back to land a huge spinning elbow that knocked Jung to the canvas and put him in survival mode for the rest of the round.

The third round saw Jung still trying to shake his jaw out from the elbow, but he continued to back Ortega up with combinations. Ortega responded with a hard attack to the body. Ortega came back with a big right hand that checked “Korean Zombie” again. In Round 4, Jung tried to push the pace to regain some momentum but Ortega’s movement and level changes made it hard to land anything of significance. Ortega ended up going for a takedown and when the action hit the cage “T-City” cut Jung with a short strike inside. Jung returned to his feet and Ortega was there for another elbow.

The fifth round was Ortega again as his punches kept Jung at bay and his defense looked tremendous. His footwork and cardio held up as well as “Korean Zombie” tried to track him down with a fight-ending shot. It never happened and Ortega was able to walk away with the lopsided decision win.

Check out the video highlights below courtesy of UFC/ESPN.

@KoreanZombieMMA has just made his main event walk.

Ortega and Zombie are starting to trade!

No fighter fits their nickname better!

NEW AND IMPROVED.@BrianTCity‘s time away has brought back a 2.0 version

MMA Junkie’s ‘Submission of the Month’ for June: The ‘Human Backpack’ strikes again 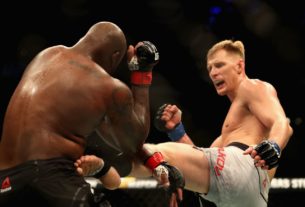