We’ll never know if Brian Ortega’s new (lack of) hairstyle played a factor in his win over “The Korean Zombie,” but the shaved-head version of Ortega looked calm, cool and collected on his way to an upset win.

Ortega (15-1 MMA, 7-1 UFC) returned from a layoff of nearly two years to take a unanimous decision from fellow former featherweight title challenger Chan Sung Jung (16-6 MMA, 6-3 UFC). The win put him in line to be the next challenger for champion Alexander Volkanovski. Jung was more than a 2-1 favorite over Ortega in the fight.

The featherweight bout was the UFC on ESPN+ 38 main event at Flash Forum at Yas Island in Abu Dhabi. It streamed on ESPN+.

“It feels good. It feels good,” Ortega said. “For all you counting me out, learn to count, mother(expletives). … Today I tried to do the best I could, to mix everything up, and show everyone I’m back. We’re going to find out if I’m ready (for Volkanovski). In this game, you take chances.”

The featherweights spent the first two minutes looking for openings with a few low kicks and jabs thrown in. Things opened up a little in the third minute of the round, but not by much – though Ortega changed stances, perhaps as result of some of Jung’s early kicks. With 80 seconds left in the frame, Ortega landed a clean left hook, and moments later knocked Jung off his feet when he caught a kick and delivered a left hand behind it. Jung threw a high kick, then followed it up with a pair of right hands. They led to kicks as an answer from Ortega. Just before the horn, Jung tried a spinning back elbow that was just off the mark.

A minute into the second round, Jung put together several punches in combination that had Ortega backed to the fence before getting back to the center, where Jung fired off another kick. Ortega caught a kick and tried to turn it into a takedown, but Jung defended to stay on his feet. Jung continued to push Ortega close to the fence, and again put together a good combo that ended with a solid uppercut with two minutes left in the round.

But with 50 seconds left, Ortega landed a spinning elbow that took Jung off his feet. Ortega closed in and tried to find the finish with Jung in guard. He landed a couple punches, but Jung scrambled back to his feet. Ortega put him back on the canvas with 15 seconds left, but couldn’t get the finish – though he put an exclamation point on the end of the round and may have stolen it back.

Ortega and Zombie are starting to trade!

Two minutes into the third, Ortega landed a heavy kick to the body, then tried to go high with a kick. Ortega’s offensive strategy shifted a little bit in the middle frame, as well. He threw kicks. He threw jabs. And he also reached out to try to grab Jung’s lead left leg, no doubt to keep him thinking about the potential for a takedown. When he went a little deeper on one of those with 45 seconds left, Jung defended – but ate a hard jab. With a few seconds left, Ortega tried another spinning back elbow, but it was just off the mark.

In the fourth, Jung tried to push Ortega back the way he had done early in the fight. But instead, Ortega took Jung off his feet briefly, and a potential clash of heads had Jung bleeding above his left eye. The referee brought in a doctor to check the cut about halfway through, but the fight restarted shortly after. Jung wasn’t able to get much of anything going with Ortega not only looking sharp offensively, but perhaps even better playing defense.

Ortega continued to work a stiff jab and kicks to the body to try to keep Jung at bay. Jung pushed forward almost certainly knowing he’d need a finish to win the fight. But with two minutes left, he still was searching for the next level of offense that might put Ortega in danger. Ortega landed several jabs in the closing seconds to put the cap on a mostly dominant performance.

Up-to-the-minute UFC on ESPN+ 38 results include: 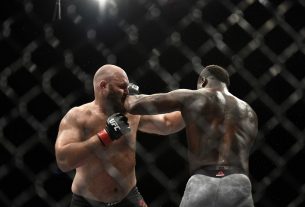