A pair of welterweights will look to rebound at the UFC’s first event of 2021.

Warlley Alves is set to fight Christian Aguilera on Jan. 16 at UFC Fight Night, which does not yet have an announced location. A person with knowledge of the matchup confirmed the booking to MMA Junkie following an initial report from MMA Fighting.

Aguilera (14-7 MMA, 1-1 UFC) saw his three-fight winning streak snapped in a submission loss to Sean Brady at UFC on ESPN+ 33. Prior to that, he knocked out Anthony Ivy in just 59 seconds in his UFC debut in June.

With the addition, the Jan. 16 lineup includes:

Luke Rockhold Vents About Inability To Find The Right Opponent 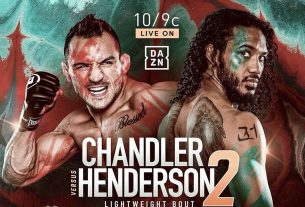