Garry Tonon moved one step closer to a shot at ONE featherweight champion Thanh Le, with victory at ONE Championship 122, and the Brazilian jiu-jitsu ace-turned-MMA contender staked his claim with an eye-catching callout following his win.

Tonon used his grappling superiority to dominate Koyomi Matsushima through the first two rounds of their co-main event bout in Singapore, then kept his composure in the third as the Japanese fighter pushed for a late finish.

Take a look inside Tonon’s win over Matsushima as “The Lion Killer” shared his thoughts during a post-fight interview session with ONE Championship interviewer and flyweight contender Gianni Subba. 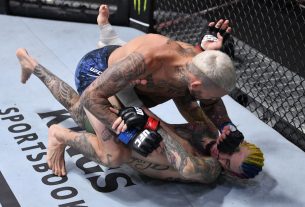 UFC on ESPN+ 20 predictions: Can Ben Askren bounce back from record KO loss against Demian Maia?