“Contender Series” has been an effective vehicle for recruiting new, cheap talent, as each time the show airs, somewhere between two-to-four new athletes join the roster. That adds up over a month-and-a-half of weekly events, which has lead to UFC looking to trim the proverbial fat.

When top-ranked UFC Flyweight Jussier Formiga was released last month, he was told by his management, “They were going to cut 75 fighters.” Per a report from MMAJunkie, we’ve found out the identity of at least four more released athletes, though none are particularly shocking: Justin Ledet, Bevon Lewis, Cole Smith, and Collin Huckbody.

In each case, there is at least a small element of wasted potential. Ledet started his UFC career with a trio of wins at Heavyweight, appearing to be a talented prospect who used quickness and boxing to outmaneuver big men. Instead, he dropped to 205-pounds, promptly lost four fights in a row, and has now been sent his walking papers.

Bevon Lewis was thrown to the deep end in his UFC debut vs. Uriah Hall, showing a lot of skill and athleticism before ultimately getting caught in the third (WATCH IT!). Since that defeat, he did managed to pick up his first UFC win, but he’s been noticeably more hesitant in each of the three fights since, which likely cost him his roster spot.

Cole Smith earned a tough debut win over once-ranked Mitch Gagnon, but the 31-year-old Bantamweight ran into talented prospects in Hunter Azure and Miles Johns afterward, dropping decisions to both men. In perhaps the most talent-rich division in the sport, that simply wasn’t enough to cut it.

Finally, Collin Huckbody never actually made a UFC debut! One of the many “Contenders Series” signees, Huckbody will instead head back to the regional scene in pursuit of another win and UFC call-up.

COVID-19 has fortunes changing quickly in the fight world, so all released fighters would be well-advised to stay ready in case an opportunity opens up.

Misha Cirkunov vs. Ryan Spann has been removed from UFC Fight Night on December 19.

Cirkunov suffered an undisclosed injury and the UFC is looking to re-book the fight in February.

Belal Muhammad demonstrates the art of the hustle.

People always asked how we get our guests on remember the show …I just keep sliding in the dms until they respond @dc_mma pic.twitter.com/J9saghJJCE

USADA threw the book at Chi Lewis-Perry, who had yet to make his UFC debut, but … it sounds pretty deserved.

An arbitrator recommended the 4-year ban on Lewis-Parry due to him presenting “falsified evidence, specifically an adulterated supplement, to USADA and the arbitrator in support of the athlete’s claims that the prohibited substances had originated from a contaminated supplement.”

These are the drugs Lewis-Parry tested positive for, per the USADA release pic.twitter.com/4fjcZYq6cf

Yair Rodriguez, on the other hand, needs to watch a five-minute video on how the app works.

yair said catch me if you can pic.twitter.com/ohv5Kj4s3x

Jamahal Hill takes a minor shot at Ovince Saint Preux over his weight miss. Does “OSP” return to Heavyweight after this one?

A bunch of fun exchanges capped off by a pretty nasty finish along the ropes:

Speranza really put his arm in danger by reaching for the head lazily while in guard.

The most classic way to land a high kick:

I am not a particularly huge Super Mario fan (obviously I like the games though, who doesn’t?), but this looks amazing. 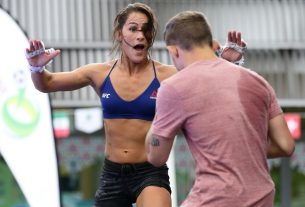 An Important Message For MMA-Holes