UFC Hall of Famer Pat Miletich announced Tuesday on Instagram that LFA has released him from his color commentating job after his participation in the Jan. 6 events that led to an attempted coup against the U.S. government.

Several social media posts showed Miletich as a part of the group that marched from a rally outside the White House to the U.S. Capitol building. From there, many in the group breached the Capitol as a joint session of Congress was in the process of certifying President-elect Joe Biden’s Electoral College victory over incumbent President Donald Trump.

In the ensuing chaos, five people were killed, including a Capitol police officer, and dozens more were injured. There is no evidence that Miletich was personally involved in the storming of the Capitol; he said on Facebook that he “saw zero violence.”

“I just got a call from the folks at the LFA, and they informed me that they were getting a lot of pressure because I was at the Capitol, and I want you guys to know that the people who I walked with at the Capitol, none of them that I know of were involved in any of the violence,” Miletich said in his Instagram video.

“The LFA was getting a lot of pressure, and they felt they needed to distance themselves from me,” he later added. “I understand their position.”

Of course Pat Miletich was in DC on Jan 6th. pic.twitter.com/nVp1yayVAp

MMA Junkie reached out to LFA with a request for comment, but it was not immediately returned.

Miletich is regularly name-checked on the list of great fighters from MMA’s early days. He defeated Mikey Burnett to become the first holder of the UFC’s 170-pound championship (then called lightweight, now welterweight) on Oct. 16, 1998, and made four successful title defenses. His last MMA fight was a win over Thomas Denny in 2008, although he participated in a kickboxing bout last summer.

Jorge Masvidal threatens to leave Twitter over Trump ban. Many of his followers don’t seem to mind.

In the interim, his Miletich Fighting Systems camp in Bettendorf, Iowa, was one of the first great MMA gyms, producing UFC champions Matt Hughes, Jens Pulver, and Tim Sylvia. Miletich was named to the UFC Hall of Fame pioneer wing in 2014.

Miletich has become a prominent figure in right-wing libertarian circles in recent years. While espousing limited government, MFS took out a federal loan for $8,700 on May 1, 2020 through the PPP program designed to help small businesses during the coronavirus pandemic

Miletich has twice been arrested for operating a vehicle under the influence of alcohol in recent years, first in Iowa in 2018 and again in Illinois last year.

You can watch Miletich’s announcement below: 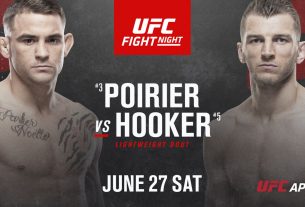