Midnight Mania! Did McGregor Give Up At UFC 257?

There is a definite belief that Conor McGregor struggles with long, difficult fights. Though there are some examples to the contrary — his second-round rally opposite Chad Mendes and victory over Nate Diaz, for example — it’s a strong enough narrative that McGregor himself spoke out to label his cardio woes a “myth.”

McGregor’s main event loss to Dustin Poirier did not go deep into the second round, but even so, the Irishman is under scrutiny in how he handles adversity. Veteran MMA coach Firas Zahabi broke down the bout on his YouTube channel, and in his view, McGregor gave up when faced with adversity.

“In the second round, when McGregor was getting hit along the fence. I found it strange that he wasn’t — it seemed like he had already gave up on the fight,” Zahabi said (transcription via BloodyElbow). “Before he hit the canvas, I felt like he had given up on the fight, because things were getting tough.

“The fight was getting tough. His left hand didn’t work, and he’s not used to that. He’s not used to hitting guys with the big left, and then (they) keep fighting. McGregor, in the second round, dropped his best card. He landed that perfect left hand, the one he’s relied on his entire career. But for one reason or another, it didn’t work.

“Poirier did not go down, and it seemed that McGregor got emotional about it. He started covering up, he was getting hit, but it didn’t look like he was trying to circle out and survive,” he explained. “He looked like a guy who was like ‘this is the end, I better do something.’ He threw a few punches, but they were like — almost desperate.”

While Zahabi did praise McGregor’s boxing and skill advantages, Zahabi also believes that Poirier’s experience in bloody battles is what help make the difference. Zahabi later summed up his view on the fight, “When McGregor gets into a heated battle, it seems like he folds. It seems like he will fold faster than Poirier by far.”

There are a lot of reactions to Jake Paul vs. Ben Askren’s official announcement, including several Askren striking clips (both good and bad). Here’s a mix of it all:

I speak for the rest of the MMA community when I say that if you knock out Jake Paul, we will strike your loss to Jorge Masvidal from the record and hail you as the savior of our sport until the end of time. Put an end to this madness.

Dustin Poirier vs. Charles Oliveira is the incredibly obvious fight to make for the Lightweight crown. It surely will not happen …

Let’s clash for this crown. Winner takes all, and becomes the King of Lightweight division https://t.co/fGJd6OlvIX

This brilliant meme is 1) totally true and 2) an excellent reminder that the same men have populated the Heavyweight division for 20 years.

What happened to Nik Lentz is some scary stuff, and there remains no great answer to eye pokes.

I’m typically not a fan of leading with a spinning backfist, because the result is usually something like the Askren clip that opened the Insomnia section. When it works though …

There is a reason he is called The Silent Assassin

Here’s the view from the stands of Poirier stopping Conor McGregor. “The Diamond” may not be able to match his foe’s speed, but the Louisiana-native throws BRICKS!

The best way to prove your instructionals are worth buying:

This old Craigslist post has been around for a while, but it manages to make me laugh every time.

Midnight Music: I stan FKA Twigs, and she just released a new song titled “Don’t Judge Me” ahead of her album written during quarantine. Easy choice for tonight! 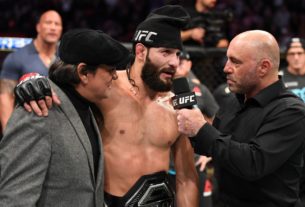 Masvidal: ‘Deal Was On The Table’ To Fight Usman At UFC 249