Did ‘Meatball’ Molly Retire In The Cage Last Night?

It was another tough night for “Meatball” Molly McCann as the Liverpudlian lost to Lara Procopio on the scorecards.

Procopio, a Brazilian jiu-jitsu black belt, controlled McCann on the ground for the majority of the match, earning a 29–27, 29–28, 30–27 unanimous decision and handing Molly her second defeat in a row. After the fight, an emotional McCann removed her gloves and laid them in the ring, typically a signal that a fighter has decided to retire.

But shortly after that display, “Meatball” took to social media to explain the move.

“Before I get into it, I left the gloves in the cage for my dad,” McCann wrote. “There’s still fight in this old dog yet.”

Before I get into it. I left the gloves in the cage for my dad. There’s still fight in this old dog yet. @dc_mma @DominickCruz

While McCann’s father died before she made it into the UFC in 2018, her fight with Procopio at UFC Vegas 18 just happened to fall on his birthday.

“Fighters draw from pain, and he always wanted to see me fight (in Las Vegas), so I have to do it for him.”

“The only thing I can give back is to honor his memory,” she finished. “This is it. Fighting for your family’s last name and for their honor is what you do, so it’s only going to push me one way come Saturday night.”

While McCann didn’t end up earning the win on Saturday night, she did show a lot of improvement against a stylistically tough opponent. The blueprint to mince “Meatball” has always been to take her down and not engage in her brawls. And while that once again worked for Procopio, McCann was much harder to keep on the ground this time round and almost ended up submitting her opponent in the second round.

With a few more camps (and less COVID restrictions), who knows … McCann could snap this losing streak and go on another run like in 2019 where she went 3-0. We’re sure her da will be proud no matter how things go. 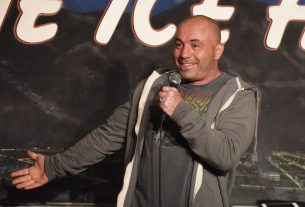 Ortiz: Joe Rogan Is A Quitter