Pic! Khabib Details Battle With Mumps Prior To UFC 254

Reigning UFC lightweight champion Khabib Nurmagomedov may never fight again, but fight fans are lucky enough to have seen “Eagle” defend his title last at UFC 254 this past October.

Khabib, who continues to try to convince UFC president Dana White that he’s going to stay retired from MMA, was close to pulling out of his bout with Justin Gaethje at UFC 254. The undefeated Russian champion had to deal with the passing of his father, Abdulmanap Nurmagomedov, prior to the fight, but that isn’t why “Eagle” contemplated withdrawing from his clash with Gaethje.

Instead, Khabib had an unexpected battle with mumps in the months leading up to the fight and never really got going in training camp. The UFC lightweight champion did a good job at keeping the issues hidden, but they were serious enough to almost put Khabib out of commission.

“I started feeling worse on the plane and when we arrive, I get a high fever,” said Khabib in a recent interview with ACA fighter Magomed Ismailov. “It was getting really bad and after a while, I was taken to the hospital, and I had intensive care for five days. It was really bad.”

One of the symptoms Khabib experienced was a seriously swollen face. Check it out below. He’s nearly unrecognizable.

Due to his battle with mumps Khabib didn’t start camp for UFC 254 until Sept. 24, just one month out from his fight with Gaethje. Making matters worse for Khabib was a broken thumb suffered just 10 days after that, leaving him little time to prepare for one of the most vicious contenders at 155 pounds.

Khabib had pulled out of fights before, specifically his previously scheduled bouts with Tony Ferguson, but most of those were related to bad weight cuts. The Russian champion rarely encountered issues throughout camp that put his availability in doubt. However, things got so bad this time around that Khabib was close to pulling out of UFC 254 before talking with his team and deciding against it.

“I was having so much (to deal with) with this fight, the disease and fractures,” he said. “At the end of the day, we decided to keep the fight on.”

The fact that Khabib pushed through his ailments to finish Gaethje via second-round submission is truly a testament to his dominance. Fight fans wouldn’t have known anything about Khabib’s battle with mumps and broken thumb if he didn’t mention them after the fight.

“You may not see this, but I felt it: He gave up,” Nurmagomedov said of Gaethje. “I mean, his will was broken. He gave up mentally. I don’t think that I won this fight physically, but rather mentally.”

Sean Shelby’s Shoes: What’s next for Thiago Santos after UFC on ESPN+ 40 loss? 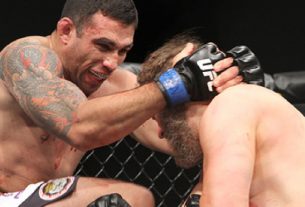