The former two-time UFC 135-pound champion will certainly have his eyes peeled at the upcoming title fight between champion Petr Yan and Aljamain Sterling on March 6 while he gears up for his return.

Although he’s open to facing any top-ranked opponent in his first fight back, Dillashaw (16-4 MMA, 12-4 UFC) has made it clear he has his sights set on regaining the title that was stripped from him when he served a two-year U.S. Anti-Doping Agency suspension for EPO.

“I think it’s a tough fight for Yan because of the style of the fighter,” Dillashaw told Mike Swick on the “Real Quick with Mike Swick” podcast.  “I think Yan’s the better, (more) well-rounded fighter. He’s got more of the skills and more aspects of fighting. But Sterling’s wrestling is very aggressive.

“(Sterling’s) striking is real uncomfortable. He doesn’t really set anything up – he just kind of bombs kicks non-stop, kind of got that distance. But then he can grab a hold of you. He’s got great wrestling and his jiu-jitsu is amazing, too. I watched him take (Cory) Sandhagen out in 45 seconds. We watched him do a lot of great grappling in some of his fights. So I think it’ll be a tough fight because I do think Yan, maybe his biggest weakness is his wrestling.”

Yan’s lone loss in his pro MMA career came to Magomed Magomedov in 2016, when he was taken down a couple of times and was edged out in a split decision. However, Yan avenged that loss to capture the ACB bantamweight title in a unanimous decision win.

Despite the loss being almost five years ago, Dillashaw thinks wrestling could still be a chink in Yan’s armor that Sterling could potentially exploit. But Dillashaw still is leaning toward the champion.

“He lost in the past to a guy that’s in Bellator just by getting outwrestled, so we’ll see the gains he’s made in his MMA wrestling,” Dillashaw said. “I would still probably put my money on Yan just because he’s a little more well-rounded, structurally and , on the feet. I think he’ll be able to keep the distance good enough. But you can’t underestimate a tough-nosed wrestler. So he can’t be counting his chickens before they hatch because he’s trying to call me out, but he’s got to get past Sterling and stay on top.”

Photos: T.J. Dillashaw through the years 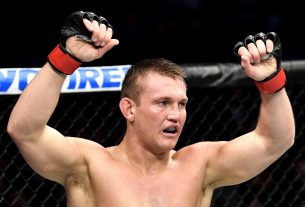 Heinisch Cleared To Compete Against Meerschaert