MMA Junkie today confirmed the booking with a person with knowledge of the contest following an initial report from Sherdog’s Tom Feely.

The two now meet at the March 13 card, which takes place at the UFC Apex in Las Vegas and streams on ESPN+.

Aldrich (8-4 MMA, 4-3 UFC) will look to return to the win column following a 14-month layoff. In her previous appearance, Aldrich came up short against Sabina Mazo via split decision at UFC 246 in January 2020.

Meanwhile, Casey (9-8 MMA, 7-5 UFC) returns to action for the first time since a third-round submission loss to Gillian Robertson this past June. “Cast Iron” was expected to face Priscila Cachoeira in October, but the Brazilian had issues with her weight cut, and the bout was called off before she hit the scales.

With the addition to the card, the UFC Fight Night 187 lineup now includes: 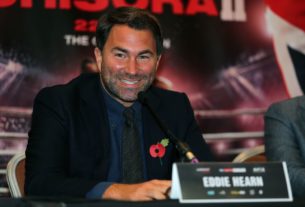 Hearn Wants DAZN To Charge $50 Per Month For Subscriptions

As incredible as Joaquin Buckley’s viral KO was, it’s not the greatest in UFC history. Here’s why. | Opinion