Angela Hill talks about her victory over Ashley Yoder at the UFC Vegas 21 post-fight press conference. She added that she is on teammate Dominick Cruz’s side of things in relation to the trouble he and other fighters say they have had with Hans Molenkamp, an executive at UFC sponsor Monster Energy Drink.

Kamaru Usman Warns Jorge Masvidal: ‘I Will Fill Your Ass Up With All That Cuban Coffee’ 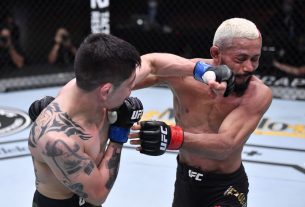 A ‘Mortal’ Figueiredo Is Good News For The Flyweight Division