Cory Sandhagen has been tapped to welcome former UFC bantamweight champion TJ Dillashaw back to the Octagon. The two will headline a UFC Fight Night event on May 8. Count Sandhagen’s teammate Curtis Blaydes among those believing he’s got what it takes to beat the former champ.

Speaking at virtual media day for UFC Vegas 19 ahead of his heavyweight main event against Derrick Lewis, Blaydes picked Sandhagen to defeat Dillashaw.

When Blaydes was asked originally, the fight was yet to be scheduled. However, the bantamweight title eliminator between the top contenders and former teammates is now officially scheduled.

Blaydes is also a former teammate of Dillashaw’s when he was still a member of Elevation MMA.

“I think that [fight] favors Cory. I do,” Blaydes said. “I know TJ’s very powerful. I know his resume because when I got to Elevation, TJ was there too.”

Dillashaw is set to make his return after a two-year hiatus from fighting, which came as a result of a suspension due to EPO use.

While Dillashaw is no longer a teammate of Blaydes, the heavyweight contender still gave the former 135-pound champ credit where it is due. But despite giving Dillashaw his flowers, the no. 3 ranked heavyweight still favors Sandhagen.

While Dillashaw has reached the pinnacle of the sport, Blaydes simply does not see any holes in Sandhagen’s game.

“A majority of fighters, there’s usually a hole in their game,” Blaydes said. “Like me, my hole is head kicks. That’s a hole in my game. We’re working on that. Cory? I don’t think he has any holes. I think he’s a complete MMA fighter and I think he’s got so many tools in his tool belt that I believe he can beat TJ.” 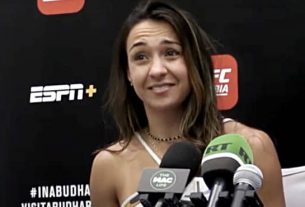