Midnight Mania! The Next Brock Lesnar?

Francis Ngannou builds hype quickly. The Heavyweight is simply frightening, a man well-deserving of his “Predator” moniker. He’s gigantic, shredded, and knocks out a majority of his opponents inside the first couple minutes.

Despite the disastrous results of their first match up, Ngannou is favored to defeat Stipe Miocic in this weekend’s (Sat., March 27, 2021) main event at UFC 260. If he does, former Heavyweight kingpin Daniel Cormier believes the title will raise his profile tremendously … perhaps even to Brock Lesnar levels of fame.

“Brock Lesnar was the last (heavyweight champion) that truly captured the imagination of the entire sports world, a guy that everybody just wanted to see,” Cormier said on DC & Helwani (transcription via BJPenn.com). “With Francis’ fighting style, if he can become the champ, everybody is gonna tune in because he’s so massive.

“I believe that Francis Ngannou is standing at the doorstep of just global superstardom, and man, it’s so intriguing,” Cormier said. “Could you imagine if Francis wins against Stipe and then Francis fights Jon Jones and wins, what type of star this man would be?”

Admittedly, that’s a lot of “Ifs,” but should Ngannou indeed knocks out Miocic and Jones, the sky is the limit for the Cameroonian power puncher.

This is a great fight and step up for Ili Topuria, but it’s not the top ranked for Ryan Hall was aiming for — pulling out of the Dan Ige matchup definitely hurt.

We’re coming up on the anniversary of a cursed moment.

Shana Dobson may not have had a great UFC career, but this is one hell of a story!

Miocic has a lot of excellent performances, but his absolute masterclass opposite Mark Hunt really stands out as his most complete showing to me. Brilliant feints and takedown setups!

A post shared by MMA by the Numbers (@numbersmma)

Mike Tyson vs. Evander Holyfield 3 is turning into a really old will-they-won’t-they scenario.

Is this a knockdown or a slip? You decide!

This is an excellent choice for most underrated fighter, and all newer fans should check out Igor Vovchanchyn’s highlights at least. Any other names come to mind?

No other fighter has ever had a more successful 4 year run. He’s an absolute legend that barely gets recognition. https://t.co/ALJKHQZdep pic.twitter.com/XLDBTUx8uP

Head off the center line is a simple concept that’s difficult to master.

Midnight Music: I stumbled upon this dope playlist of the “150 best French songs of the 1960s.” I don’t know a thing about French music (let alone from that specific decade), but I listened to a bunch of it today. Here’s a track from the one name I do know: 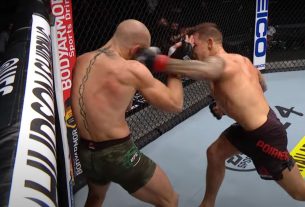