LAS VEGAS – Not all that long ago, Thomas Almeida looked liked a potential challenger for the UFC bantamweight title, but for now his goals are far simpler.

It’s been more than four years since Almeida had his hand raised in the octagon, and he says that needs to change at Saturday’s UFC 260.

“I always want to win, so this is for sure a must-win,” Almeida told MMA Junkie at Wednesday’s media day at the UFC Apex. “I always go for the victory. I put pressure on myself: win, win, win. That’s it.”

While Almeida has dropped three straight, it has come against a slew of talented contenders in Jonathan Martinez, Rob Font and Jimmie Rivera. But that stretch also included a lengthy layoff of more than two years due to eye surgery.

Almeida’s return fight was scheduled for this past October against Alejandro Perez. However, when Perez tested positive for COVID-19, Almeida’s long-awaited comeback was pushed back a week, and his opponent was changed to Martinez.

Change of date, change of opponent, change of fighting stance on the opposite side of the cage – Almeida took it anyway, though he suffered a decision loss at the UFC Fight Night 180 clash.

“It’s kind of hard, but it is what it is,” Almeida said. “You’ve go to go out there and fight. I did, it didn’t go my way, but now I have another great opportunity to show my skills.”

“I’m super excited,” Almeida said. “Sean is a great fighter, very talented guy, but I know if I go in there and throw all the tools that I have, I’m going to win, for sure.”

For Almeida, the bout represents an opportunity to not only secure a much-needed win, but to do it against a credible opponent, as well. But Almeida isn’t really too concerned with where he stands in the division or what it means moving forward. It’s been too long since the talented Brazilian has been able to taste victory. He says the most recent loss is behind him now, but victory is paramount.

“I knew it was part of the process of coming back, of the return, so I kept training, and now I’m way better prepared, more confident,” Almeida said.

To hear the full interview with Almeida, check out the video above. 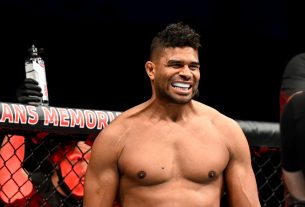 Overeem vs Sakai In The Works For Sept. 5