One of the biggest rematches in heavyweight history will go down later tonight (Sat., Mar. 27, 2021) at UFC 260 live on ESPN+ PPV from inside UFC APEX in Las Vegas, Nev., as UFC heavyweight champion Stipe Miocic puts his title on the line against knockout puncher Francis Ngannou.

This is an ultra-important fight for both men. In regards to Miocic, this is his opportunity to prove his decision win over Ngannou three years ago was no flash in the pan. The consensus greatest heavyweight of all time has already cemented his legacy in the sport, but another win over Ngannou will further send Miocic up the pound-for-pound ladder.

For Ngannou, this is his chance to avenge a previous loss to Miocic and show to the world that he’s the next champion in line at the heavyweight level. Ngannou has smashed every fighter he’s encountered since his loss to Miocic and will come into this fight with more hype than the first. However, if Ngannou loses to Miocic again there’s really no where for him to go. He may not get another title shot for quite some time.

It’s going to be one of the most talked about main events of the year, but when will Miocic and Ngannou actually make their respective walks to the Octagon later tonight at UFC 260?

With four other fights taking place on the PPV main card starting at 10:00 p.m. ET, Miocic vs. Ngannou 2 is likely to begin sometime around 12:15 a.m. ET (Sunday). None of the undercard bouts are scheduled for more than three rounds so things could roll along pretty quickly. However, a welterweight clash between former UFC champion Tyron Woodley and Vicente Luque is scheduled for the co-main event. Most of Woodley’s fights tend to go the distance so that could back the main event up just a little bit.

If things run late (or early) Mania will be sure to provide an updated start time for tonight’s Miocic vs. Ngannou 2 main event. You won’t want to miss it!

MMAmania.com will deliver LIVE round-by-round, blow-by-blow coverage of the entire UFC 260 fight card RIGHT HERE, starting with the early ESPN/ESPN+ “Prelims” matches, which are scheduled to begin at 7:30 p.m. ET, then the remaining undercard balance on ESPN/ESPN+ at 8 p.m. ET, before the PPV main card start time at 10 p.m. ET on ESPN+ PPV.

For much more on this weekend’s UFC 260 PPV event click here. 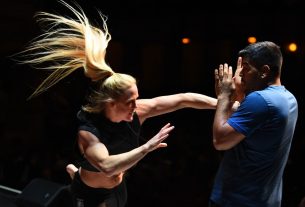 Latest UFC Fight Card For ‘Holm Vs Aldana’ On Aug. 1

Dana White: ‘Shogun’ Rua ‘Looked Like a Shell of His Former Self’ at UFC 255