The UFC’s heavyweight title is on the line Saturday in a bout the promotion is billing as the “biggest, baddest rematch” when reigning champion Stipe Miocic faces the hard-hitting Francis Ngannou.

The bout is the UFC 260 main event at the UFC Apex in Las Vegas. The main card airs on pay-per-view following prelims on ESPN and early prelims on ESPN+.

Miocic (20-3 MMA, 14-3 UFC) and Ngannou (15-3 MMA, 10-2 UFC) first met in 2018, in the main event of UFC 220. That night, Miocic dominated over the course of five rounds to prove himself the baddest man on the planet. But Ngannou has since strung together four consecutive knockouts to earn himself another crack. The highly anticipated rematch features the top two fighters in the USA TODAY Sports/MMA Junkie heavyweight rankings bidding for the UFC belt.

Ahead of the blockbuster matchup, the UFC’s traditional pre-fight series, “Embedded,” has returned. The fifth episode features Miocic and Ngannou, as well as Tyron Woodley, Vicente Luque, and Sean O’Malley. Here’s the UFC’s description from YouTube:

Francis Ngannou trains with Kamaru Usman, and Sean O’Malley starts his weight cut. Vicente Luque peels off the final pounds, and champ Stipe Miocic plays cards with his team. UFC 260 foes face off after they weigh in on Friday morning. 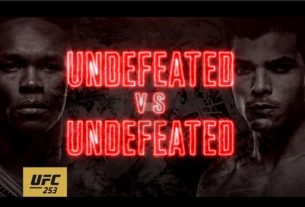