LAS VEGAS – All signs point to the trilogy bout between Dustin Poirier and Conor McGregor taking place at UFC 264 this summer.

UFC president Dana White has said for several weeks that the plan is to book the rubber match between Poirier (27-6 MMA, 19-5 UFC) and McGregor (22-5 MMA, 10-3 UFC) next. Saturday, he provided additional details, including a timeline, location and potential venue for the marquee lightweight matchup.

According to White, the fight is targeted to go down at UFC 264, which is tentatively slated to take place July 10 at T-Mobile Arena in Las Vegas.

“That’s the plan,” White told reporters, including MMA Junkie, at the UFC 260 post-fight press conference. “I hope so (that it’s Poirier vs. McGregor 3). We all hope so.”

.@DustinPoirier vs. @TheNotoriousMMA is targeted for #UFC264 on July 10 at T-Mobile Arena in Las Vegas, says Dana White.@Justin_Gaethje could be the backup.

Poirier, who chose to pursue another clash with McGregor rather than fight for the vacant lightweight title in the aftermath of Khabib Nurmagomedov’s retirement, appears to be completely on board with the potential date. At least according to his post on social media, which included the date with an emoji of a diamond – his nickname – but no other information (via Twitter):

After McGregor scored a first-round knockout of Poirier in their initial meeting at UFC 178 in September 2014, “The Diamond” earned his revenge in the rematch when he TKO’d McGregor at UFC 257 in January.

Nothing is official at this point, but things appear to be moving in the right direction for the definitive clash in the series to be finalized for the UFC’s July pay-per-view that’s routinely one of the promotion’s biggest events of each calendar year.

Tyron Woodley Admits He ‘Blew Through’ Money As UFC Champion 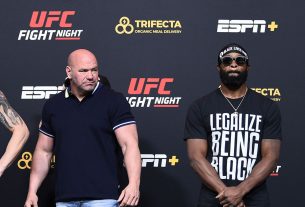 White: Woodley Is ‘The Hardest Kid I Ever Dealt With’