With top Chinese star Zhang Weili defending her women’s Strawweight title in UFC 261’s co-main event tomorrow night (Sat., April 24, 2021) inside Vystar Veterans Memorial Arena in Jacksonville, Fla., Ultimate Fighting Championship (UFC) is taking the opportunity to showcase some of the nation’s latest prospects. On this edition of “New Blood,” the series where I grow increasingly irate at organizations without dedicated video archives, we look at a “Contender Series” graduate and a trio of young Chinese talents.

CFFC champion Pat Sabatini is also set to make his debut, but he got a write up back in February (read it here) before planned foe Rafael Alves tanked the fight by missing weight.

Sichuan’s Rong Zhu is undefeated (10-0) since last tasting defeat in 2018, including a fifth-round submission of Marcio Andrade to claim the WLF W.A.R.S. Lightweight title. He was last seen scoring a third-round knockout in Jan. 2021.

Solid switch-hitting, a good gas tank, legitimate power and a concrete slab of a chin make Rongzhu a remarkably dangerous fighter for such a young man. He prefers to work behind the jab when orthodox, but leans on hard straight lefts and body/low kicks from southpaw. While content to work at range and pick his shots, he’ll throw down if necessary, and the aforementioned chin and power make doing so a valid option.

His biggest issue right now is cage awareness. As good as his lateral movement is, he simply ends up near or against the fence way too often, opening him up to strikes and takedowns as he runs out of room to retreat. Though his takedown defense is generally solid and he can scramble back to his feet decently well, he has to lean on those skills too often for my liking.

On the offensive grappling side, he boasts a solid double-leg and can do some damage with his ground-and-pound. His top control seemingly needs work, however, as he has issues holding people down and maintaining position. Still, it can work as a surprise weapon once his opponents get used to the striking battle.

Rongzhu is a hell of a lot more polished than your average 21-year-old and looks to have some impressive physical gifts on top of that. I can definitely see him at least reaching the heights of countryman Li Jingliang.

Opponent: He fights Mexican grappler Rodrigo “Kazula” Vargas, who’s winless (0-2) in UFC after a decision loss to Alex da Silva and a disqualification against Brok Weaver. Rongzhu should be able to take him apart on the feet, though Vargas could potentially find some success grinding him against the cage if Rongzhu continues to struggle with keeping the center.

A perfect amateur career (5-0) gave way to a 1-2 professional start for Molina, who bounced back with six straight wins to earn a spot on “Contender Series.” There, he handily out-struck Jacob Silva to earn a contract, though he had to settle for his first professional win by submission.

This will be his second attempt at a UFC debut, as he tested positive for COVID ahead of a planned January clash against Zarrukh Adashev.

Molina is the latest James Krause acolyte to join UFC, and as the “Contender Series” announcers pointed out, his style isn’t terribly dissimilar from his coach’s. He’s a lengthy, mobile switch-hitter who does his best work at range, picking away with hard kicks and a stinging jab. Trying to charge in puts you square in the firing line of his accurate counters, most notably his heavy right hand, and he’s more than capable of switching gears and putting on some pressure of his own.

That said, he’s definitely more vulnerable on the advance than on his bicycle. While he does a good job of gliding out of range on the back foot, his distance management suffers when he’s turning it on, leaving him open to counters as he leads with single kicks or overcommits to a one-two combination. He’s got some pop and some sneaky tricks, like shifting mid-combination or firing a head kick after a long stretch of targeting the legs body, but he’s better served letting opponents come to him.

His ground game is more of a mixed bag than those five submission wins would suggest. Recent opponents have found success catching his kicks for takedowns, and second-most-recent foe, Kenny Porter, had a ton of success racking up top control before a flubbed takedown let Molina take mount and choke him out. Plus, while he does have some offensive wrestling in his arsenal, he’s yet to show it off against quality opposition. Wrestling definitely seems like the way to go about beating him at the moment.

Though not a champion in the making, Molina’s a capable and promising fighter who’s still early enough in his career to make considerable strides. In short, give him some time to develop and you’ve got a potential Top 15 fighter.

Opponent: He meets Shanghai Performance Institute graduate Qileng Aori, a stalking slugger with a heavy right hand and some wrestling in his back pocket. I haven’t managed to find enough recent footage of Aori to make a definitive call, but he looks like he’s got enough defensive lapses for Molina to win a long-range striking battle.

Tape: His “Contender Series” bout is on ESPN+.

Aori — who ran into future UFC competitors Grigorii Popov and Kai Kara-France during an 8-5 professional start — enters the cage this Saturday in the midst of a six-fight win streak. His most recent efforts saw him avenge a prior loss to Amirlan Amirov and knockout Khizri Abdulaev, the latter in Feb. 2020.

A disclaimer for both Aori and fellow newcomer: Liang Na: despite investing a considerable amount of time, I was unable to locate footage of either fighter that was more recent than 2018. As such, take my analysis with a grain of salt.

A tall Flyweight listed at 5’7” in places and 5’9” in others, Aori primarily relies on a steady diet of jabs, crosses and the occasional left hook or flying knee. His right hand is particularly sharp and he knows it, often throwing it from the hip and compromising his reach advantage in the process. When he’s got someone hurt, he’s happy to knuckle down and trade leather, and he’s demonstrated a pretty solid chin for when opponents don’t break.

On the wrestling side, he’s shown a nice sprawl and a functional double-leg he can bust out when needed. How well either of them will hold up against world-class opposition remains to be seen.

The 2018 iteration of Aori is probably too one-note to get terribly far in the Octagon, but I was similarly dismissive of another rangy one-named striker in Sumudaerji, and “The Tibetan Eagle” has gone on to become a genuine contender. Having said all that, Saturday’s debut will be very illuminating.

Liang started her professional career 7-0 before a 4-4 stretch saw her fall to future Bellator champion Juliana Velasquez and UFC competitors Liliya Shakirova and Mariya Agapova. She was last seen scoring her fifth professional armbar in Jan. 2021 to extend her win streak to four.

Liang has one gameplan and she sticks to it: get the fight to the ground as rapidly as humanly possible. If she ends up on top, it’s all about aggressive, borderline reckless passing until the opportunity to lock up a submission arises. If she ends up on her back, she’ll immediately start chasing armbars and heel hooks. It should come as no surprise that all but one of her pro wins have come in the first round.

Her single-minded persistence, though admirable, can get her in trouble. Recklessly chasing takedowns left her open to Velasquez submitting her in return, and Agapova beat the snot of her from guard while avoiding armbar after armbar. We’ve seen more than one hyper-specialized grappler fall apart against strong opposition, so Liang will have to hope she’s more Ryan Hall and less Paul Sass.

The Liang who fell to Agapova might catch one or two UFC fighters unaware, but top-shelf wrestlers and fighters with quality submission defense will eat her alive. For her sake, she’d better have improved by leaps and bounds these last few years, which isn’t out of the question considering her young age.

Opponent: She takes on Brazilian mauler Ariane Carnelossi, who’s been out of action since a cut stoppage loss to Angela Hill in her 2019 UFC debut. “Sorriso” sports solid takedown defense and has Liang completely out-classed on the feet, so expect her to sprawl-and-brawl her way to victory.

Remember that MMAmania.com will deliver LIVE round-by-round, blow-by-blow coverage of the entire UFC 261 fight card right here, starting with the early ESPN2/ESPN+ “Prelims” matches online, which are scheduled to begin at 6 p.m. ET, then the remaining undercard balance on ESPN/ESPN+ at 8 p.m. ET, before the PPV main card start time at 10 p.m. ET on ESPN+ PPV.

To check out the latest and greatest UFC 261: “Usman vs. Masvidal 2” news and notes be sure to hit up our comprehensive event archive right here.

Robbie Lawler Out of UFC 255, Mike Perry Calls Out Chimaev 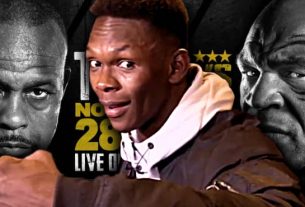