Skip to content
‘A gentleman never tells’: Nick Diaz is causing quite a stir by being at UFC 261

We figured Nick Diaz would be seen back at a UFC event next month when his younger brother, Nate, returns to fight Leon Edwards on May 15 at UFC 262, but wait just a minute.

Diaz has been in Jacksonville, Fla., all week ahead of tonight’s UFC 261, leading people to wonder why he’d attend this particular event headlined by a rematch between welterweight champion Kamaru Usman and Jorge Masvidal.

Diaz, 37, hasn’t competed in ages – Jan. 31, 2015, to be exact, when he fought Anderson Silva at UFC 183. Every now and again, talk of a Diaz return to competition bubbles up, and that happened again this past December after Diaz’s manager, Kevin Mubenga, said there was a “99.99999 (percent)” chance Diaz will fight this year. After that came out, it didn’t take long for UFC president Dana White to say he wasn’t sold on that happening.

And yet, here we are, just hours from UFC 261 as of this writing, and Diaz earlier today stoked speculation with this tweet:

For all we know, Diaz is just in town to enjoy some fights cageside. But folks on Twitter certainly have thoughts, theories or are just fired up to see that he’s there:

‘A gentleman never tells’: Nick Diaz is causing quite a stir by being at UFC 261 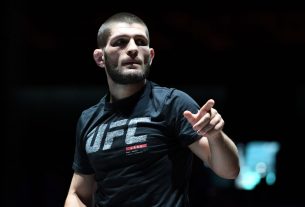 Mac-Happy Smith Shut Down By Khabib 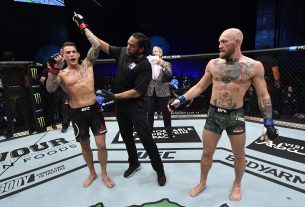