Dominick Reyes issues statement on KO loss: ‘What an elbow!’

Reyes (12-3) was defeated for the third time in a row on May 1 at UFC Apex in Las Vegas. The 31-year old debuted in the UFC in June 2017 as an undefeated fighter. After winning his first six fights inside the octagon, Reyes fought for the 205-pound title against then-champion Jon Jones. The judges scored the bout for Jones by unanimous decision, but many people think Reyes did enough to take the belt.

After losing to Jones, Reyes saw himself back in a title fight for the title Jones vacated. He faced Jan Blachowicz at UFC 253 in September and was defeated by TKO. He’s been stopped in his last two outings.

“Finally home and surrounded by those I love, I’d like to say, I went out there and fought with all my heart! I put it all out there and I’m glad it was entertaining for most of you. I’m happy and upset as you can imagine as I didn’t get the desired outcome. But I went out and fought and for that I can say I’m proud. I love this game and at times it does not love me back but that’s what we have all signed up for. I want to say I’m doing good healing up I’ll be OK. And congrats to @JiriProchazka hell of a fight and what an elbow! It’s the ones you don’t see coming that get you. God bless you all and I’ll see you guys at the next one,” Reyes posted on Instagram.

Is there renewed hope for Francis Ngannou vs. Jon Jones as Twitter war erupts?

Dominick Reyes issues statement on KO loss: ‘What an elbow!’

Alistair Overeem was “fired up” about fighting in an empty arena 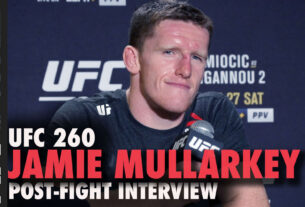