DEERFIELD BEACH, Fla. – Henri Hooft has had many special moments with Michael Chandler, but he would love to cap it off with UFC gold.

After just one fight in the UFC, former three-time Bellator lightweight champion Chandler (22-5 MMA, 1-0 UFC) will face Charles Oliveira (30-8 MMA, 18-8 UFC) for the vacant 155-pound title in the UFC 262 main event May 15 at Toyota Center in Houston.

Chandler made waves in his octagon debut by making quick work of Dan Hooker at UFC 257 in January, and even his head coach Hooft admits their road to gold was a little quicker than he anticipated.

“Nobody was expecting that,” Hooft told MMA Junkie. “The first fight was very special. Of course, it’s very special for me because I was in Bellator so long with him. I was with Eddie Alvarez first and we fought Michael, and then later on I trained with Michael. We got the belt back. We lost it once due to injury and we won it back again, and then he went on a great run. I think we went like 10-2 training together, so we had some nice moments. The last fight with Benson Henderson, when he made up his mind, he said, ‘I want to go to the UFC.’ I was like, ‘If you really want to test yourself and the way you’ve been preforming in your past couple of fights, it’s cool. Go there, you have nothing to lose. You’re already a champion anyway so go there, test the water and see what it is.’

“He has an explosive style. Everybody wants to see that. Fans want to see him fight because he goes hard. In the first fight with Dan Hooker, everybody thought in the beginning, ‘Oh, that’s going to be difficult. He’s going to knee him. He’s tall,’ this and that. And I was like, that’s just even better because you get the good opponent for your first fight. Most people were thinking he’s not going to get a win because that guy is really, really tough. And then what he did, that’s Michael Chandler. He goes in there and just lays it out.”

Hooft won his first UFC title with welterweight champion Kamaru Usman in 2019 and he’d like nothing more than to see one of his hardest-working fighters wrap the UFC lightweight title around his waist.

“I’m very happy that we got the shot,” Hooft said. “Of course, because for me I think it’s the fourth or fifth time where we’ll fight for the belt, and after the welterweight belt, I would love to win a lightweight belt with Michael Chandler, especially with Michael Chandler. A really good guy – he’s really good in the gym, a good teammate and he’s a good guy for the company. He’s well-spoken, he’s a real champion, a family man, but he’s got a really tough fight.

“He has all the experience, he fought very tough guys and he beat Dan Hooker, and now we’ve got Charles Oliveira, who’s really respected. I really like his style of fighting – he’s very good everywhere.”

Jon Jones responds to Francis Ngannou: “You ain’t scaring nobody, I saw your heart” 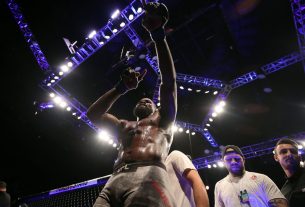