Nate Diaz vs. Leon Edwards won’t be happening this month at UFC 262.

Diaz (20-12 MMA, 15-10 UFC) has suffered a minor injury, the exact nature of which is unknown at this time, and his welterweight matchup Edwards (18-3 MMA, 10-2 UFC) has been postponed from the May 15 event in Houston to UFC 263 on June 12. It will remain a five-round fight, despite being a non-title headliner.

MMA Junkie verified the change with multiple people close to the situation following an initial report from Yahoo! Sports. The people requested anonymity because UFC has yet to make an official announcement.

UFC 263 will takes place at the Gila River Arena in Glendale, Ariz. The main card airs on pay-per-view following prelims on ESPN and ESPN+.

Diaz has not competed or been booked since a November 2019 “BMF” title loss to Jorge Masvidal. One of the most popular fighters in UFC history, Diaz remained active on Twitter during his time away from the cage, taking shots at potential future opponents from time to time.

Having not lost since 2015, Edwards (18-3 MMA, 10-2 UFC) rode an eight-fight winning streak into his March 13 main event clash against Belal Muhammad. The fight ended in Round 2 after Edwards poked Muhammad in the eye and rendered him unable to continue.

Photos: Nate Diaz through the years 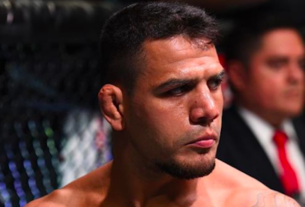