After a solid but unremarkable start in the UFC that saw him win his first four fights via decisions (two of them splits), Giga Chikadze seems to have really found his groove. His last two fights were impressive TKO wins, one a massive head kick finish against Jamey Simmons and the other a quick one minute liver kick finish against Cub Swanson.

After beating Swanson, Chikadze went big by calling out Max Holloway… not exactly someone the rest of the featherweight division is lining up to fight after what he did to Calvin Kattar. But it was actually the Kattar fight that got Giga excited to potentially face off with the former 145 pound champ.

“I guarantee you I’m the best striker in the organization and a better striker than Max Holloway. I just need a chance to prove it. And it doesn’t matter if it’s three round fight, five round fight. I only give [Max] two … Yeah I believe I can do it.”

The general consensus after Holloway beat the brakes off of Kattar was that he’d fight for the title again. But there’s two things that make me think maybe Max’s immediate future could involve a Chikadze fight: first, current champ Alexander Volkanovski is set to film a season of The Ultimate Fighter and then face Brian Ortega in the late summer / early fall of 2021.

Secondly, if Volkanovski holds onto the belt, he’s already got two wins over Holloway. If Max wants to keep the pressure on for a title shot, some recent highlights would certainly help.

A bout against Chikadze could be seen as competitive enough to be interesting but not so high risk that it might worry Team Holloway. In a sport where you only get paid when you fight, does Max really want to wait until 2022 to compete again?

“My message is gonna be: Max, you’ve been a champion, you’ve fought the best of the best from different divisions,” Chikadze finished. “I’m the new name in the organization and this is the fight you’re looking for. You’ve had the belt already. I know you are a contender. But this is a fight that fans would enjoy the most. If you engage, I’m here.” 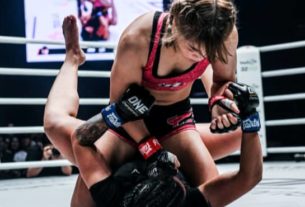 Stamp Fairtex remains undefeated, closes in on third championship at ONE: A New Tomorrow