Muhammad: Israel-Palestine Is About ‘Humanity,’ Not ‘Religion’

Ahead of his fight at UFC 263, Belal Muhammad speaks passionately about the ongoing conflict between Israel and Palestine.

The crisis between Israel and Palestine is one close to Muhammad’s heart.

Muhammad (18-3) meets Demian Maia at UFC 263, which takes places this weekend (Sat., June 12, 2021) inside Gila River Arena in Glendale, Arizona. Born and raised in Chicago, Ill., to Palestinian parents, the fatalities caused by the conflict is one that troubles the Muslim fighter.

“I literally love Jewish people. Our religions are close when you speak about our religion. When people say you’re anti-Jewish or anti-this, bro, my best friend is Jared Gordon and I’m going to be standing up at his wedding,” he continued. “People are nuts. It literally has nothing to do with religion, it has to do with humanity. People are literally dying and people are losing their homes.”

Muhammad also stresses that Hamas, the largest of several Palestinian militant Islamist groups, should not be used as a justification for the death of innocents.

“You show a picture of kids dying and I get so many comments like, ‘What about Hamas?’ Bro, you think this 3-year-old kid that just got bombed and killed is Hamas? People look for keywords, trigger words that will get other trolls that just comment on your thing to get a rise out of you.”

Muhammad urges people to look at statistics instead of siding with national pride.

“What would you think if I said, ‘Yo, Group A has over 300 kids died, 1,000 people displaced from their homes, and Group B has 10 deaths and one of the biggest armies and all these weapons and all this money?’ Which side are you going to take?” he asked.

As an American-born citizen, Muhammad also calls on U.S. President Joe Biden to take a firm stance against escalations of violence.

“They need somebody to really step up and put an end to this. You can’t have the President of the United States saying, ‘Well, they [Israel] have a right to defend themselves from Hamas.’ When you say stuff like that, it puts it out there to the regular Joe Schmo that doesn’t really know what’s going on. I think the biggest thing with people is that they’re misinformed,” Muhammad asserted. “Not a lot of people know what’s really going on there. You don’t have the mainstream media really pushing the story of what’s happening and the history of it.”

UFC 263 will stream live on ESPN+ pay-per-view (PPV). The fan-filled event is headlined by a rematch pitting UFC Middleweight champion Israel Adesanya opposite Marvin Vettori. Also on the card is a Flyweight title rematch between division champion, Deiveson Figueiredo, and No. 1-seeded challenger, Brandon Moreno.

Remember that MMAmania.com will deliver LIVE round-by-round, blow-by-blow coverage of the entire UFC 263 fight card right here, starting with the early ESPN+ “Prelims” matches online, which are scheduled to begin at 6 p.m. ET, then the remaining undercard balance on ESPN/ESPN+ at 8 p.m. ET, before the PPV main card start time at 10 p.m. ET on ESPN+ PPV.

To check out the latest and greatest UFC 263: “Adesanya vs. Vettori 2” news and notes be sure to hit up our comprehensive event archive right here. 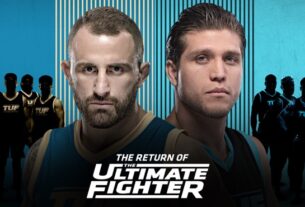