Professional Fighter’s League returned tonight (June 10, 2021) with their fourth event of the 2021 season. While there were several exciting “regular season” bouts between veteran fighters looking to advance into the playoffs, inarguably the biggest draw of the night was the main event, which featured the MMA debut of legendary boxing champion Claressa Shields.

Despite preparing with the famed Jackson-Winkeljohn Academy for her MMA crossover, Shields debut did not start well. It did not take long for her opponent, Brittney Elkins, to drag her to the mat from the clinch. In top position, it was brown belt vs. white belt, and Elkins was able to control several minutes from the mount.

The second round started better for Shields, who managed to string together a few combinations and show off her fast hands. However, she got a bit too eager when defending a takedown, winding up on bottom in the ensuing scramble. Once there, she was thoroughly stuck on bottom, though Shields did manage to defend an armbar and avoiding giving up her back completely.

Besides the obvious pugilistic edge, there is another benefit to being a boxing world champion: cardio. Despite her success on the mat, Elkins was tired in the third, and Shields stood ready to capitalize. After taking top position following a failed takedown. Shields really let loose on her opponent. Elkins hung onto a leg, but she was absolutely battered in the process.

When Elkins began to wilt, the referee stepped in, handing Shields her first professional MMA victory.

Claressa Shields is still in the fight! Plenty of time left in round 3!#2021PFL4
ESPN2 & ESPN+
https://t.co/WfOt9XBfzk pic.twitter.com/TzrXRSY0kI

IT’S ALL OVER!!! CLARESSA SHIELDS IS HERE TO STAY!#2021PFL4 pic.twitter.com/6zYPYwCGQY

This was one hell of a debut for Shields! She was seriously tested on the mat, and there were actually moments of solid fundamentals from the boxer. However, she also made some really questionable decisions — hardly unreasonable from a debuting athlete! Fortunately, her athleticism really bailed her out in the final frame.

It will be very interesting to watch her career develop moving forward.

Brian Ortega (admittedly, a gigantic Featherweight) is down to take a diversion to teach Colby Covington some respect, and well … I’d watch it!

@ColbyCovMMA let’s do 165 I’ll make your name relevant. We don’t bitch out where I’m from . LA bitch West Up

This is a big match up for the women’s Flyweight division.

It’s still not been made why Tom Breese was forced to withdraw last week, but UFC seemingly isn’t happy about it.

Tom Breese has been removed from the UFC rankings pool

Someone on the UFC production/photography/wardrobe team really punked Marvin Vettori ahead of the biggest fight of his life.

Has Marvin Vettori.. put his shorts on backwards..? pic.twitter.com/FNj2DWBmIB

Max Griffin has been scrapping it out for well over 10 years.

A lot of athleticism is showcased in this column; here’s the opposite.

Midnight Music: I had a request for Dr. Octagon a couple nights, and yeah … I can do that! 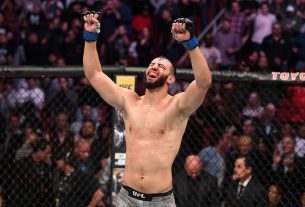