Chaos: ‘Marty’ Moves The Needle … Right Into His Keister

Even with his victory over Nate Diaz, which took place at UFC 263 last weekend in Glendale, No. 3-ranked welterweight contender Leon Edwards will be forced to wait for Kamaru Usman to defend his 170-pound title against longtime nemesis Colby Covington.

So why hasn’t “The Nigerian Nightmare” signed the contract?

“Marty Juiceman, the CEO of EPO, he’s desperate,” Covington told Submission Radio. “He’s so desperate that he fled the country. He fled the country to somewhere off-grid so he can turn his plane on airplane mode and not have to answer calls from Hunter Campbell and Dana White, because he knows he needs to sign that contract against me. I know he’s never been to Africa and he wants to claim like this is his first time going to Africa and he’s going back to give love to his country and this and that. The guy’s never been to Africa. He was born in Dallas, Texas. He went to college in Nebraska. He’s trying to save face and act like he’s Nigerian, go to Africa, act like he’s an African, this and that. But, he’s desperate. He’s running and hiding and he’s not answering the calls from the UFC to get this contract signed between me and him.”

That said, UFC President Dana White already promised Covington the next crack at the 170-pound crown, so Usman may drag his feet or hem and haw for the next few weeks, but you can expect “The Nigerian Nightmare” to make their rematch official sooner, rather than later.

Simply because Usman doesn’t have any choice, according to “Chaos.”

“The thing about Marty Usman is, he doesn’t move the needle,” Covington continued. “The only needle that he moves is the needle that moves to his butt when he injects steroids in himself. So, the thing is that Marty, he’s not the matchmaker for the UFC. The matchmaker is Hunter Campbell, Dana White, all the high-ups, in the UFC, Ari Emanuel, whoever they want to decide. So, I don’t know why a fighter is trying to act like a matchmaker. If you claim to be this GOAT, this pound-for-pound great, all this stuff, you don’t pick who you fight. You fight who the UFC puts in front of you. You fight who the people want you to fight. The people want this fight. They want Usman-Covington round two. This unfinished business.”

Usman has yet to respond. 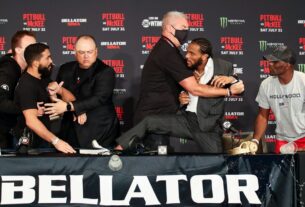 Pitbull, McKee Get Heated During Presser!