Georges St-Pierre reveals money he made from UFC, gambling on himself in open essay

Georges St-Pierre used to work as a garbage man while he fought for the UFC.

That’s just one revelation from the former UFC double champion in a revealing first-person essay written for Wealthsimple Magazine titled, “The UFC Won’t Pay You Fairly Unless You Make Them.” In it, St-Pierre peels back the curtain on what his financial situation was like while fighting for the world’s most prominent MMA promotion.

It wasn’t until 2008 that St-Pierre started making what would be considered big money for a mixed martial artist. He was undisputed UFC champion after defeating Matt Serra by second-round TKO, and his star was on the rise. His UFC contract also was on the verge of expiring with just two more fights.

If he hit free agency, St-Pierre believed he would be in high demand. So he and his team acted accordingly.

“Like a poker bluff, we said, ‘We don’t want to re-sign before the fight – we want to just finish the contract,’” St-Pierre wrote. “We took a big risk. Because it’s like a stock market. Your stock might go up if you’re successful, but it can also go down if you lose. But that’s what we decided to do. I always believed in myself, so we took the big risk. …

“So after I won the championship in 2008, I took a big gamble on myself and told UFC I was not going to re-sign with them. And then, the day before my fight with Jon Fitch, the UFC came back with a big, crazy contract because they didn’t want me to become a free agent. You read I made $400,000 a match? No. I made a lot more than that. A lot more than that. Millions. When I was at the peak of my career, I was making many millions of dollars.”

St-Pierre, 40, was a prime star and big pay-per-view draw during his second stint as UFC welterweight champion, a run that lasted nine title defenses from August 2008 to November 2013. He walked away from the sport after a controversial win over Johny Hendricks at UFC 167. St-Pierre wrote that it was because he felt “disgusted with the performance-enhancing drug problem” in the UFC.

“I saw the organization sometimes wanted to protect their athletes instead of going for the truth,” he added.

When he returned in November 2017 and won the UFC middleweight title against Michael Bisping, St-Pierre said he made “about $10 million” for the fight. St-Pierre relinquished the belt a month later citing a gastrointestinal health issue. In February 2019, he announced his retirement from MMA and has since been successful as an actor and other endeavors.

“I’m very lucky and very privileged that I finished on top,” St-Pierre wrote. “The reality is most fighters finish broke and broken. They hang there too long. They get brain damage. They go broke. I’m very healthy, and I’m wealthy. It’s very rare to find someone that hangs up his gloves and finishes on top like this.”

St-Pierre’s willingness to open up about his own financial situation with the UFC comes at a time when public chatter about pay has increased among prominent fighters – Jon Jones, Francis Ngannou and Paulo Costa, among them. It’s also on the heels of UFC president Dana White blocking St-Pierre from making a payday boxing Oscar De La Hoya under the Triller Fight Club banner, which St-Pierre expressed disappointment in.

Even though St-Pierre is retired as a mixed martial artist, his UFC contract remains frozen, giving White full say on whether he could compete in another combat sport.

Photos: Georges St-Pierre through the years


Georges St-Pierre reveals money he made from UFC, gambling on himself in open essay 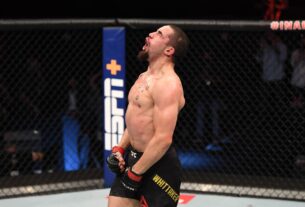 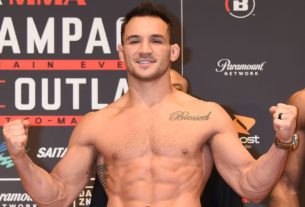 Karl Roberson excited for launch of UFC’s ‘Fight Island’: ‘This will show who the real fighters are’