Leon Edwards reveals advice Nate Diaz gave him after UFC 263: ‘Don’t let these motherf—kers tell you that you ain’t s—t’

Edwards (19-3) and Diaz (20-13) fought for 25 minutes in what was the UFC’s first-ever five-round non-title non-main event fight in the promotion’s history. The fight took place at UFC 263 at the Gila River Arena in Glendale, Arizona on Saturday, June 13. Following the fight’s conclusion, the two combatants shared words. On Monday, Edwards shared a portion of their conversation.

“Nate told me after the fight, ‘Don’t let these motherf—kers tell you [that] you ain’t s—t. Name your price or they will name it for you,’ and I felt that,” Edwards tweeted.

Diaz had long complained about his status, both financially and promotionally, in the UFC. It was a short-notice victory of Conor McGregor and a highly-publicized rematch that gave Diaz a rare chunk of leverage and star power in the UFC game. He later headlined Madison Square Garden against Jorge Masvidal for the ceremonial BMF title at UFC 244.

Edwards had firm control of Diaz, 36, on the feet and on the ground across the first 20-minutes of the fight. Diaz landed a Stockton slap-straight left combo late in round five that had “Rocky” on spaghetti legs. The younger brother of Nick Diaz poured on the strikes in the closing moments but was unable to put Edwards away. The final decision read 49-46 across all three scorecards in Edwards’ favor.

UFC 263 took place at the Gila River Arena in Glendale, Arizona on Saturday, June 13. The pay-per-view card was headlined by Israel Adesanya vs. Marvin Vettori for the UFC middleweight title.

To check out the latest and greatest UFC 263: “Adesanya vs. Vettori 2” news and notes be sure to hit up our comprehensive event archive right here. 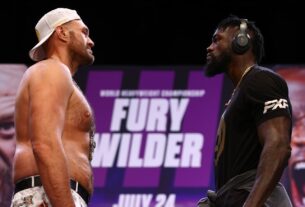