No. 1 ranked welterweight contender Colby Covington gave his thoughts on the aftermath of UFC 263 and the implications it has on the welterweight division.

‘Chaos’ discussed the welterweight bout between no. 3 ranked welterweight Leon Edwards and Nate Diaz. He said he was unimpressed with Edwards’ unanimous decision win over Diaz and referenced Diaz noticeably wobbling Edwards with a combination punctuated with a straight jab late in the fifth round.

“I think Edward Scissorhands, he’s out here claiming to be this God and he’s ready for a title shot,” Covington said to Submission Radio. “Dude, you’re struggling with a lightweight journeyman, who has double digit losses on his record, and this guy is almost finishing you and you think you need to be in a title shot? That guy needs to go win 10 more fights or 20 more fights.

“If he can’t get by Nate Diaz like that, that guy’s a Stockton soy boy. He’s been finished by everybody. I mean, the guy’s got no gas left in the tank. He’s even saying it himself, he has no more motivation left to fight. So, if you’re struggling with a guy like Nate Diaz, there’s nowhere you belong anywhere close to a world title fight.”

Covington also reacted to reigning UFC welterweight champion Kamaru Usman saying after UFC 263 that he does not believe anyone deserves a shot at his belt.

“Marty ‘Juiceman’, the CEO of EPO, he’s desperate. He’s so desperate that he fled the country. He fled the country to somewhere off grid so he could turn his [phone] on airplane mode and not have to answer calls from Hunter Campbell and Dana White, because he knows he needs to sign that contract against me,” Covington said in reference to Usman’s recent visit to Nigeria. “I know he’s never been to Africa and he wants to claim like this is his first time going to Africa and he’s going back to give love to his country and this and that.

“The guy’s never been to Africa. He was born in Dallas, Texas. He went to college in Nebraska. So, he’s trying to save face and act like he’s Nigerian. Go to Africa, act like he’s an African and this and that. But, he’s desperate. He’s running from me. He’s hiding and he’s not answering the calls from the UFC to get this contract signed between me and him.”

When he addressed the state of the division, Covington mentioned he does not believe Usman is a ‘needle mover’. Covington added even if Usman does not think Covington deserves the next title shot, ‘The Nigerian Nightmare’ does not make the fights, the UFC does.

“The thing about Marty Usman is that he doesn’t move the needle. The only needle that he moves is the needle that moves to his butt when he injects steroids in himself,” Covington said. “The thing is, is that Marty, he’s not the matchmaker for the UFC. The matchmaker is Hunter Campbell, Dana White, all the high ups in the UFC. Ari Emanuel, whoever they want to decide. So I don’t know why a fighter is trying to act like the matchmaker.

Regardless of Covington defending his spot at the front of the line for a welterweight title shot, UFC president Dana White has all but guaranteed ‘Chaos’ is up next.

Yoel Romero explains why he won’t compete at light heavyweight 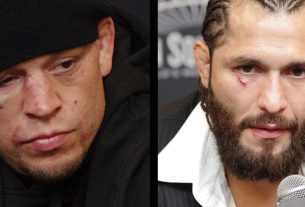 Jorge Masvidal: Nate Diaz is a dog, ‘You literally got to kill that dude’ (UFC 244 video)