Skip to content
Ray Cooper III: I’m going to put the pace on Nikolay Aleksakhin and finish him wherever the fight goes

Ray Cooper III is confident that he will put Nikolay Aleksakhin away just like he has everyone he’s faced.

Cooper (21-7-1) takes on Aleksakhin (26-5) in the co-main event of 2021 PFL 5, which takes place Thursday at Ocean Casino Resort in Atlantic City, N.J. The main card airs on ESPN2 following prelims on ESPN+.

With a 100 percent finishing rate, the reigning PFL welterweight champion is looking to build off his quick submission win over Jason Point, with another finish over Aleksakhin.

“My opponent’s a kickboxer and that’s pretty much all I know about him,” Cooper said at the pre-fight news conference. “I’m gonna take him out the same way I do everybody and put the pace on him and wherever the fight goes, I’m going to finish him.”

Ray Cooper III can’t wait to compete against Rory MacDonald: ‘It doesn’t matter who’s in front of me’

Having notched the fastest finish out of any welterweight at 2021 PFL 2, Cooper is currently sitting at the top of the standings. Also scoring six points on the night was Rory MacDonald, who Cooper hopes to cross paths with at some point.

“Yeah I look forward to fighting him,” Cooper said. “I’ve watched his fights all of his career and it seems like we’re gonna fight. Maybe in the playoffs, maybe in the championship, but it doesn’t matter. Whenever we fight, I’m gonna take him out too. This is my division, and I’m the king in this division.”

Ray Cooper III: I’m going to put the pace on Nikolay Aleksakhin and finish him wherever the fight goes 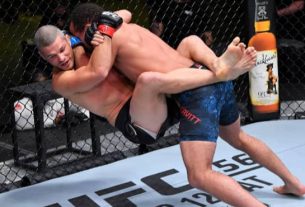