Magomed Magomedkerimov needed less than two minutes to choke out Curtis Millender on Thursday at 2021 PFL 5.

Magomedkerimov, a former PFL champion in the welterweight division, used the rarely seen Ezekiel choke to put out Millender and net six points in the regular season finale for his division, which took place at Ocean Casino Resort in Atlantic City, N.J.

After some exchanges on the feet, Magomedkerimov put Millender on his back, advanced to mount, applied massive pressure and sunk in the choke. Millender had nowhere to go, and the fight was over at the 1:57 mark of Round 1.

Check out the video highlight of the finish below (via Twitter):

Getting the early finish was critical for Magomedkerimov’s playoff hopes. He missed the first fight of the regular season, which resulted in an automatic one-point forfeiture. As a result, he gets five points for the opening-round stoppage and is likely to land in the next round once 2021 PFL 5 concludes.

“I knew that I missed the first round of fights,” Magomedkerimov said in his post-fight interview with Sean O’Connell. “I had to finish no matter what.” 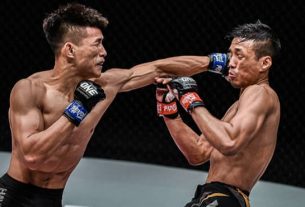