Former UFC middleweight champion Anderson Silva had one of the most iconic walkouts in history during his MMA career.

The lights in the arena would go dark and a few moments later the first notes of DMX’s “Ain’t No Sunshine” hit the speakers while colored spotlights began circling the arena. Fans, who were already on their feet in anticipation, typically began cheering louder as the arena’s lights came back on to see the Brazilian legend make his walk from the tunnel to the cage.

“DMX is part (of) my journey inside the sport,” Silva told WorldStar HipHop. “I use the DMX song ‘Ain’t NO Sunshine’ for inspiring me to walk in to do my best inside the cage, inside the ring.”

In April, Earl Simmons, the rapper and songwriter better known as DMX, passed away at the age of 50. Silva paid tribute to the legendary rapper on the day of his passing on Instagram:

Today is a very sad day!”
DMX, I’ll be forever your fan!”
Thank you, you will always be remembered with respect and a lot of affection from me!
May God comfort the family!
RIP

A post shared by Anderson “The Spider” Silva (@spiderandersonsilva)

In “Ain’t No Sunshine,” the first lyric in the opening verse begins with, “Who turned out the lights?” A fitting question, considering Silva left a number of his opponents unconscious in the cage.

“When I hear the song, I feel something strong inside my body, inspiring me to do more and more,” Silva explained. “Of course, I use the same song because it’s part of me and it’s part of my story.”

Silva is preparing to return to the boxing ring to face Julio Cezar Chavez Jr. at Tribute to the Kings in Guadalajara, Mexico on June 19. There is no shortage of training footage available of Silva hitting pads preparing for this fight, but the former champ looks ready for action.

Check out the video above to see Silva talk about DMX’s influence on his career.

Photos: Anderson Silva through the years 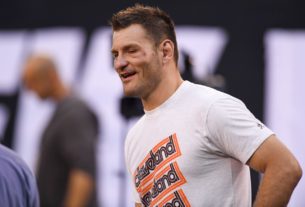