‘Bro, You Got Knocked Out!’ — Usman On McGregor

Kamaru Usman and Conor McGregor have championship credentials in common, but Usman admits that McGregor’s global star power is something he can’t relate to.

Usman (19-1) recently appeared on the True Geordie Podcast and talked about the pressure on McGregor (22-5), the latter of whom has teased an eventual UFC welterweight title run.

“My daddy used to always say, ‘Everybody loves the chair, but while they’re chairing they can’t make the move,’” Usman said (h/t Mirror UK). “That’s exactly what Conor feels like and I know it – it’s tough. I know it’s hard being Conor, I know it’s hard. I am a champion and I know how hard it is to be the champion now.

“I can’t imagine what Conor’s going through, that’s got to be hard because you can’t do anything,” he continued. “People can’t wait to move because now people are just waiting to rub it in your face.”

While McGregor has a massive global fanbase, Usman argues that many people are eager to see McGregor fail.

Usman is coming off a second-round knockout win over Jorge Masvidal to successfully defend his UFC welterweight title. UFC President Dana White said that Colby Covington is next in line for a title shot. McGregor will fight Dustin Poirier in a rubber match at UFC 264 on Saturday, July 10 after going 1-1 in their series. 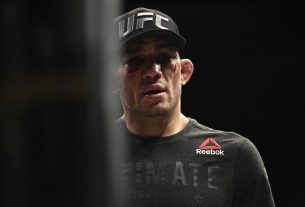 What’s Next For Tony Ferguson?