The Next Nate Diaz?

UFC featherweight contender Chan Sung Jung wants to fight for the 145-pound strap for the second time in his combat sports career, but understands that losing to Dan Ige in the UFC Vegas 29 main event, which takes place this Sat. night (June 19, 2021) in Las Vegas, pretty much eliminates him from title contention.

But Plan B doesn’t sound so bad, at least from a fan’s perspective.

“I definitely look at the rankings,” Jung told MMA Junkie. “I still believe I’m in title contention, and my goal is to win a world title. If for some odd reason that I do lose this fight, then maybe I will be kind of an exciting fighter.”

His interpreter suggested Jung could become the next Nate Diaz, who can’t seem to win a fight these days but gets showered with accolades for bleeding profusely and landing the occasional wobbler.

Blame the lack of brawling.

“Dan’s a brawler,” Jung said. “If he wants to brawl, I’ll more than welcome that kind of fight. I thought a lot of people were saying that about Ortega, too, that he was going to brawl with me. I was ready for that and it never happened. So, we’ll see what happens.”

The 29 year-old Ige (15-3) rebounded from a disappointing loss to Calvin Kattar at UFC on ESPN 13 by smashing Gavin Tucker back in March. “Dynamite” is 7-1 over the last three years and now has a chance to jump into title contention with a victory over Jung.

He’ll get five rounds to get it done.

To see who else is fighting at UFC Vegas 29 click here.

Video: Nick Diaz (allegedly) is serious this time about UFC return. Who should he fight? 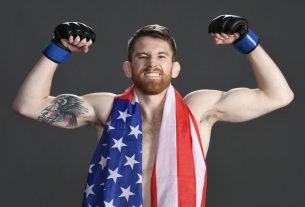