Jung enters this bout with his back to the wall, which is a rough turn of events considering he was closing in on a title shot just last year. Now, the 34-year-old veteran is looking to avoid consecutive losses, which would (perhaps permanently) eject him from the Featherweight title mix. Conversely, Ige is younger in both age and his career. He’s just recently climbed into the ranks last year, and though he did suffer his own main event defeat in 2020, Ige has already rebounded and appears ready to make another run.

Let’s take a closer look at the keys to victory for each man:

Keys to Victory: The South Korean is tremendously sharp on the counter, slick on the mat, and a major physical threat. Despite having a great deal of technique to his game, Jung seems to constantly be fighting the urge to throw caution to the wind and swing big.

In all of Jung’s recent struggles, he’s been clipped while aggressively throwing combinations at his opponents. On the flip side, most of his recent finishes have been scored by planting his feet and timing his opponent’s entries.

In addition to Jung’s recent history, there are other reasons for the South Korean to work from the outside and looking for counters. First and foremost, Jung is the more proven kicker. Jung also holds advantages in height and reach. Finally, Ige will likely be looking to wrestle, and a bit of patience will help ensure that “The Korean Zombie” doesn’t get dumped on his back while pushing forward.

This match up also feels like a very possible return of Jung’s rear uppercut. Ige likes to load up on his power shots by squatting down, so between that habit and his would-be takedown game, the uppercut may line up perfectly.

Keys to Victory: Ige is a hard-nosed scrapper. The Hawaiian is willing to take a shot to land one if necessary, and he throws with rather surprising power for a man with relatively few knockout wins. Really, Ige’s best aspect is his top control, as “50k” can do major damage once able to score the takedown.

This is a difficult match up for Ige, in part because his strengths play into Jung’s hands. Ige likely does not have the wrestling to immediately wrangle Jung to the mat — few do — nor does he want a straight up trade of power punches with the more proven knockout artist.

Unlike past “Zombie” foes, Ige doesn’t really have the style or tools to fight from distance. Instead, he’ll have to pursue Jung and walk a fine line between war of attrition and straight up war. While he wants to push the pace and create openings for takedowns, he cannot get his block knocked off in the process.

Body shots really seem to be a big key here. Ige has nicely finished combinations with a left liver kick in the past, and he generally does well at mixing body punches into his offense. He must be wary of the uppercut, but body work will help him slow Jung and his strikes, as well as set up takedown entries.

The winner of this fight is in title contention.

I do not know how Featherweight is going to shake out after Alexander Volkanovski and Brian Ortega face off. Presumably, the winner of Max Holloway vs. Yair Rodriguez is next in line? Maybe Zabit Magomedsharipov returns from his semi-retired state? Outside of those names, tonight’s victor is likely the highest ranked 145-pounder, so he would certainly be at worst another win or two away from a title opportunity.

The stakes are high for each man, though for different reasons. For “The Korean Zombie,” he cannot afford consecutive losses at his age. Jung will always be a fan favorite, but a loss here is a sign that the division has moved past him. Alternatively, Ige came up short in his first main event slot, and doing so a second time would also signal that the Hawaiian is not quite ready for the title mix.

At UFC Vegas 29, Chan Sung Jung and Dan Ige will duel in the main event. Which man will earn the victory? 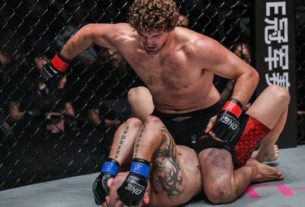 Jose Aldo sees nothing controversial about UFC 251 title shot: ‘I deserve to be here’