Get a detailed breakdown of the betting lines for UFC Vegas 32, which is set to hit UFC APEX in Las Vegas, Nevada, this weekend (Sat., July 24, 2021), including best bets, underdogs, favorites and much more!

UFC Vegas 32 figures to be a pretty darn violent evening, so let’s get some money involved and see what happens …

What Went Wrong at UFC Vegas 31?

Aside from Miles Johns’ fight collapsing just hours from showtime (details here), everything else went off without a hitch. Admittedly, Rodrigo Nascimento gave us a scare, but we came out on top.

UFC Vegas 32 Odds For The Undercard:

Thoughts: Yeah, I can work with this. Punahele Soriano and Adrian Yanez are the undercard picks of choice this week.

I’ll be the first to acknowledge that Soriano’s still pretty untested; Oskar Piechota and Dusko Todorovic are talented, sure, but they’re considerably less than the sum of their parts. Allen is more proven, a better offensive striker, and a superior offensive wrestler than either of them. Critically, however, he’s also easy to hit, and Soriano’s left hand is more than sufficient to shut the lights out.

In short, put a bit on the Hawaiian, who I see scoring an early finish.

Randy Costa is going to get the firefight he wants from Yanez, but it’s not going to go his way. Yanez has a concrete slab for a chin, dynamite in his hands, and far sharper boxing than the brawl-happy Costa. While “The Zohan” could very well just spark him out of nowhere, Yanez has too much going his way for me to ignore.

A bit on Julio Arce might work out, too. Andre Ewell has not panned out the way I hoped he would, and while Arce’s layoff worries me a bit, his kickboxing and wrestling skills look sufficient to exploit the flaws that “Mr. Highlight” has yet to correct.

Thoughts: I really like the looks of Miranda Maverick and Jordan Williams, and there could be some value in Aspen Ladd as well.

It’s worth remembering that Maycee Barber is still just 23 years old and lost to a highly skilled fighter in Alexa Grasso last time out. At the same time, Maverick just seems all wrong for her. “The Future’s” success largely revolves around her takedowns, which Maverick’s wrestling pedigree remove from the equation, and the latter’s no slouch on the feet, either.

Jordan Williams has everything he needs to beat Mickey Gall to a pulp: solid wrestling, big power, an indestructible chin and a quality gas tank. So long as he manages the cut to 170 pounds alright, which shouldn’t be a huge issue considering how undersized he was at Middleweight, I see him running over Gall the way Mike Perry and others did before.

As far as Ladd, I’m just not hugely impressed with Chiasson’s development. Though Chiasson is gigantic for the weight, her issues with takedown defense and her still-developing striking seem to play right into Ladd’s hands. I definitely expect Ladd to out-work her, so be sure you’re in position to profit.

All signs point to UFC Vegas 32 producing some wild outcomes, so be sure you don’t miss ‘em. See you Saturday, Maniacs.

Remember that MMAmania.com will deliver LIVE round-by-round, blow-by-blow coverage of the entire UFC Vegas 32 fight card right here, starting with the ESPN/ESPN+ “Prelims” matches, which are scheduled to begin at 4:30 p.m. ET, then the remaining main card balance on ESPN/ESPN+ at 7 p.m. ET.

To check out the latest and greatest UFC Vegas 32: “Sandhagen vs. Dillashaw” news and notes be sure to hit up our comprehensive event archive right here. 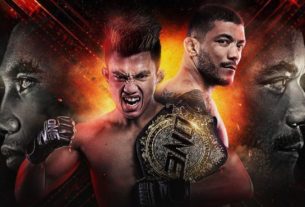