Rawlings Returns To BKFC On Oct. 22

Could Rawlings avenge her 2016 loss to VanZant later this year? That may depend on the outcome of BKFC 19.

Let’s hope Paige VanZant is getting accustomed to rematches.

The former UFC strawweight, who runs it back with Rachael Ostovich in the BKFC 19 main event later tonight (July 23) on FITE TV in Tampa, could find herself squaring off with former UFC rival Bec Rawlings later this year.

That’s because “Rowdy” is expected to make her bare-knuckle return on Oct. 22, according to BKFC head cheese David Feldman, after spending the last two years competing for Bellator MMA. Rawlings, 32, is 3-0 for BKFC with a decision win over Britain Hart from summer 2018.

Nothing is official at this time and any future talk of a potential rematch between VanZant and Rawlings will largely depend upon the outcome of the BKFC 19 headliner. Don’t expect Ostovich — who was submitted by “12 Gauge” in early 2019 — to serve as anyone’s pit stop.

For much more on tonight’s BKFC 19 event click here. 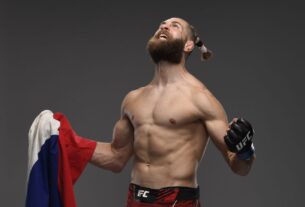 Prochazka Pegged As Back Up For Blachowicz Vs Teixeira