HOUSTON – Kevin Holland has been filling a hole in his game by working with two of the most decorated wrestlers in the sport.

Holland (21-7 MMA, 8-4 UFC), who was stifled for 10 rounds in his past two unanimous decision losses to Derek Brunson and Marvin Vettori, believes he has made the necessary moves to fine tune his grappling.

“I went out there with ‘DC,’ and all those kids were whooping my ass, and then I went ahead and came back home and started working with Johny (Hendricks), and then I worked with ‘Mindset Mike’ down here, so it’s been good. It’s been a whole bunch of wrestling, and honestly it’s been cool learning the wrestling and actually learning it, not just having to do it and just getting f*cked up the whole time.”

After competing twice in the span of 21 days earlier this year, Holland is currently taking some time off before returning to action on Oct. 2 to face Kyle Daukaus.

“Big Mouth” admits that after a banner 2020, which included him tying the UFC record for most wins in a calendar year at five, he was forced to change his approach and mentality to training when he was dominated in two straight losses.

“I used to be real stubborn,” Holland said. “I didn’t want to work with anybody unless it was Travis (Lutter) when it came to grappling, and then after realizing I’m not as good at grappling as I thought, I was like, ‘OK, bring Johny over here,’ so it’s been amazing. Johny is a really, really good coach. … I think Johny will be a big, big part of the camp moving forward.”

He continued, “Just make grappling second nature. As long as I make that second nature, the schedule when I get back is fully active. Every weekend if you want me.”

To see the full interview with Holland, check out the video above. 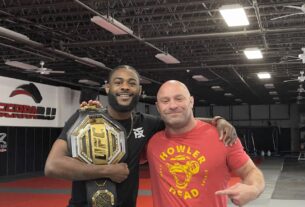