Khalil Rountree produced a first in UFC history on Saturday in his brutal TKO win over Modestas Bukauskas.

During a main card bout at UFC Fight Night 191 from the UFC Apex in Las Vegas, Rountree (9-5 MMA, 5-5 UFC) landed a vicious knee stomp to the left leg of Bukauskas (11-5 MMA, 1-3 UFC) that caused him to immediately fall to the ground, screaming in agony.

The time of the stoppage was the TIME mark of Round 2, giving Rountree a much-needed win after back-to-back losses. There have been plenty of leg kick TKOs over the course of UFC history, but Rountree’s side stomp is unlike any finish prior.

Watch the video below to see the highlight of Rountree’s finish (via Twitter):

It’s over! Khalil Rountree is VICIOUS with the side kick #UFCVegas36 pic.twitter.com/rw4MBgZZxv

Rountree said he worked on the technique that finished Bukauskas during training camp, and he landed it in the fight with bad intentions behind him.

“I didn’t work it in training camp with the intent that I had and threw it with today, because I don’t want to hurt my training partners,” Rountree said in his post-fight interview with Michael Bisping. “I knew when he threw a jab he was very heavy on the front foot. That’s when I threw it and that’s when it landed.”

It was an important win for Rountree’s career, and he said it marked a new chapter.

“My mindset today was just win,” Rountree said. “Win the fight. I don’t care. I’m not hiding anymore. I’m dealing with my fear head-on. I just knew I had to come in here and just get the job done.” 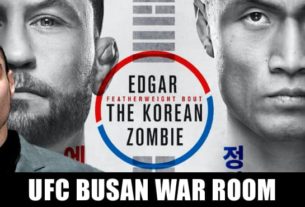