One of the more unexpected boxing matchups in recent memory will unfold tomorrow night (Sat., Sept. 11, 2021) live on FITE TV pay-per-view (PPV) from inside Seminole Hard Rock Hotel & Casino in Hollywood, Fla., as former UFC champions Anderson Silva and Tito Ortiz square off inside of the ring.

While Silva vs. Ortiz will serve as a prelude for the headlining act between Evander Holyfield and Vitor Belfort combat fans are more interested in seeing the co-main event than the main course. That’s because “Spider” and “Huntington Beach Bad Boy” are two of the most popular UFC fighters of all time and former champions who failed to meet inside of the Octagon when they were competing under the UFC banner.

Don’t worry. While we won’t get to see Silva and Ortiz fight under the bright lights of the Octagon at least the two fighters will lock horns in a sanctioned boxing match Saturday night. Silva certainly has the edge in the striking department, but Ortiz is the bigger man and never shy of going in for the kill.

Ahead of their co-main event matchup, Silva and Ortiz stepped on the scale Friday for official weigh ins. Unfortunately, Ortiz failed to make weight and missed by a whole five pounds. Silva was nice enough to take 20 percent of Ortiz’s purse and let the fight go on. After they tipped the scale both fighters squared off for one final staredown. Check it out below:

Two former UFC Champions are set to compete in a boxing match.

Only time will tell which former UFC champion has enough left in the tank to pull out the victory live on FITE PPV this weekend in Florida. Silva is coming off a masterful return to boxing this past June when he defeated former world champion Julio Cesar Chavez Jr., but Ortiz is looking to prove his doubters wrong and put a beating on the man they call “Spider.”

Stick with Mania for full coverage of Saturday’s ‘Holyfield vs. Belfort’ PPV card. 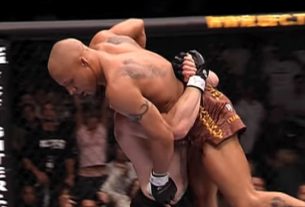