At BKFC 21 on Friday evening, Alexander made his bare-knuckle boxing debut against Wes Combs on the main card. An MMA veteran of over 30 professional fights with impressive names on his resume, some old tendencies followed Alexander into the BKFC ring.

When the referee signaled for the bout to begin, Alexander showed a calculated approach as he looked for openings. It didn’t take long for him to identify his opportunity, because out of nowhere he landed a hard right hand to send Combs crashing to the canvas.

However, Alexander’s MMA fighting instincts kicked in at that moment and followed up with another punch as his opponent laid on the canvas staring at the ceiling.

In what should have been an act that would have resulted in a disqualification, the officials in Nebraska did not penalize Alexander for the extra punch and declared him the winner by knockout just 34 seconds into the first round.

Alexander, 49, looked very sharp with his hands, but his old habits almost ruined a spectacular moment in his career. 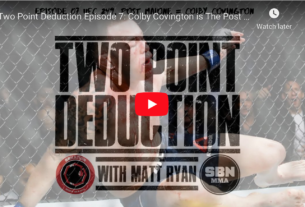