Photo: Yoel Romero has a disturbing look on his face ahead of Bellator 266

Whatever Yoel Romero’s intentions are, they do not look good.

Whatever that expression on Yoel Romero’s face is, please keep it away from this writer.

Romero is preparing for his previously delayed Bellator debut when he headlines Bellator 266 opposite Phil Davis, taking place inside SAP Center in San Jose, California on Sat., Sept. 18 via Showtime. “The Soldier of God” shared a photo of himself ahead of the fight and, well, it’s something.

Romero (13-5) last competed in a failed bid to capture the Ultimate Fighting Championship (UFC) Middleweight title from Israel Adesanya at UFC 248 in March 2020. Despite being 1-4 in his last five fights, three of those losses were against UFC champions and the other was a debatable decision against Paulo Costa.

Finished reading this story? The party doesn’t have to stop. Click here to get more of the latest MMA news. 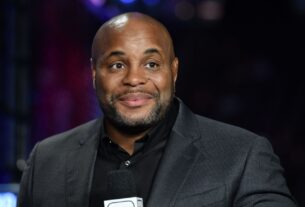 Dustin Poirier picks Daniel Cormier to replace Dana White: ‘He would be a great face of a company’