The future was looking pretty grim for Anderson Silva after the former UFC middleweight champion was released from his Endeavor contract back in late 2020. Rightfully so, considering the 46 year-old Brazilian was coming off his third straight loss, part of a dreadful 1-7 (1 NC) run over the last nine years.

Even Bellator MMA, which provided a sandy beach for UFC jetsam like Ken Shamrock and Kimbo Slice, among others, was unwilling to give Silva a place to wash ashore. So the aging “Spider” paddled his way to the “sweet science” and quickly racked up two straight wins, including last weekend’s destruction of MMA veteran Tito Ortiz.

“Anderson Silva, we honestly need to start talking again about this guy as the GOAT,” UFC President Dana White said at the “Contender Series” press conference (transcribed by MMA Junkie). “He now left this sport, which he was considered one of the greatest of all time, possibly even the greatest of all time, goes out, beats (Julio Cesar) Chavez Jr. in a boxing match, and knocks Tito out in 40 seconds.”

Silva (34-11, 1 NC) was the most dominant champion in the history of the middleweight division but did not come without his share of baggage. In addition to his random fits of jackassery, “The Spider” failed a couple of drug tests during his UFC career, which he attributed to sex pills and tainted supplements.

“When Tito fought here, Tito had a good chin,” White continued. “Tito took big shots from a lot of guys who hit hard. Anderson Silva knocked him out in 40 seconds. Anderson Silva might actually be the GOAT of combat sports. It’ll be interesting to see what he does next. I fucking guarantee you this, you ain’t gonna see Jake Paul calling Anderson Silva out.”

UFC on ESPN+ 29 predictions: Is anyone picking Glover Teixeira over Anthony Smith? 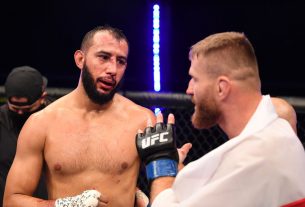